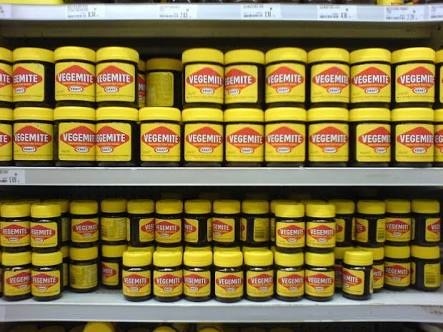 1) Australians spread about 1.2 billion serves of Vegemite on toast, bread or biscuits every year. If this was all placed end to end, it would go around the world three times.

2) 235 jars of Vegemite can be produced every minute at Kraft Foods’ Port Melbourne manufacturing facility. That’s 338,400 jars a day.

3) Over 22 million jars of Vegemite are sold every year.

4) 30 jars of Vegemite are sold in Australia for every one that is exported.

5) Yeast is one of the world’s richest known sources of B group vitamins, especially thiamin, riboflavin and niacin. These vitamins can be found in Vegemite. A thin spread of Vegemite will supply between a third and two thirds of a seven year old child’s daily requirements. For adults, it supplies between a quarter and a half. B group vitamins are essential in the body’s use of proteins, carbohydrates and fats, which assists your body to be strong and have energy.

6) One serving of about a teaspoon or five grams of Vegemite has 50% of the recommended daily allowance (RDA) of folate, which is an important nutrient, especially for women trying to get pregnant. Women who take the RDA of folic acid, prior to getting pregnant, have a much lower incidence of bearing children with a variety of birth defects.

7) All Vegemite is produced in Kraft’s factory at Port Melbourne, Victoria.

8) Vegemite was referenced in the lyrics of the 1982 worldwide song “Down Under” by Men at Work. It is also the most watched overseas Australian song on You-tube.

9) Vegemite recently sold out in Hong Kong supermarkets due to high demand in the Asian region. Apparently, the demand for Vegemite stems from the black spread being rated “Umami” – a Japanese word that literally evokes a fifth sense of utmost deliciousness. The Japanese have also re-named Vegemite ‘bejimaito’.

10) Vegemite first arrived in Australian shops in 1923 in a jar shaped like a lighthouse.

11) In 1922 food entrepreneur Fred Walker asked chemist Cyril P. Callister to make the yeast product more acceptable so it could compete against the British version Marmite.

12) In 1928 falling sales, it was released with a new name: Pawill. This was a play on words with the competition: ‘If Marmite … then Pawill’. It was still not widely accepted until the name was changed back.

13) Vegemite was included in soldiers’ rations during World War Two and there was a big marketing campaign.