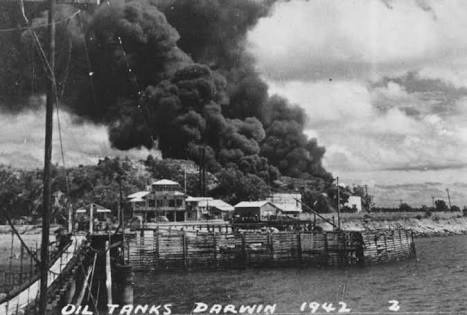 Darwin, capital city of Australia’s Northern Territory, was just a small town with a civilian population of less than 2000 during World War II. Nonetheless, it was a strategically-placed naval port and airbase. The first of an estimated 64 air raids against Darwin during 1942-43 occurred on 19 February 1942. At least 243 civilians and military personnel were killed, not counting the indigenous Australians whose deaths were not counted, as the Japanese launched two waves of planes comprising 242 bombers and fighters. Following the February raid, other parts of Australia including Darwin, northwest Western Australia and even regions of far north Queensland were subject to over one hundred more raids. Airport base areas attacked included Townsville, Katherine, Wyndham, Derby and Port Hedland, while Milingimbi, Exmouth Gulf and Horn Island were also targetted. 63 more Japanese raids occurred against Darwin and its immediate surroundings, some of them heavier than others. On 6 July 1943, the last of the heavy air attacks against Darwin occurred. The attack was directed against the US Liberator base at Fenton, located about 150 kilometres south of Darwin. Three pilots were killed, while three bombers damaged and eight Spitfires and a Liberator were destroyed. Three more minor attacks were carried out in August. The final attack on Australian soil occurred on 12 November 1943. There was only minor damage around the town of Darwin, and no casualties.