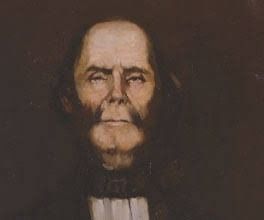 William Buckley was born in Marton, Cheshire, England in 1780. He arrived in Australia as a convict, and was a member of the first party of Europeans to attempt the first settlement at Sorrento, on the Mornington Peninsula, Victoria. On 27 December 1803, soon after his arrival, he escaped from custody. Despite the friendliness of the local indigenous Wathaurong people, Buckley was concerned they might turn hostile, and initially chose to try to survive on his own. However, he soon realised his inability to fend for himself in the harsh bushland, and he sought out the Wathaurong again. On his way, he happened upon a spear stuck in the grave of a recently deceased member of the tribe; the Aborigines, finding him with the spear, believed he was their tribal member returned from the dead, and greeted his appearance with feasting and a corroboree. Buckley spent the next 32 years living among the indigenous Wathaurong people. Bridging the cultural gap between Europeans and Aborigines, he gained many valuable bush skills and was a crucial factor in reconciliation in those early days. To keep the peace between the two races, Buckley gave himself up to free settler John Batman’s landing party on 7 July 1835. Ultimately, Buckley was pardoned and became a respected civil servant. The Australian saying “Buckley’s chance” means to have a very slim chance, and was spawned by his amazing story of survival in the bush.