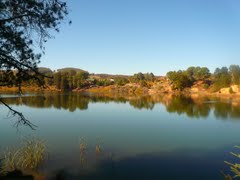 Henry McKay was charged with the murder of his lover Emily Yeomans. McKay, who for some time had been working in Barnawartha, had returned to Hurdle Flat to visit Emily. That evening was spent at McKay’s aunt’s house. During the night, a dispute arose between the couple about a boot Emily had lost whilst in an intoxicated state.

At 7 a.m. the following morning McKay ordered Emily to go and look for the missing boot but she refused to do so. He then attempted to beat her but was prevented from doing so by a man named Thomas Beazley, who happened to be present. Emily and McKay then left together to look for the boot, but had not gone more than 150 yards when two carriers, who had camped close to the house, heard cries of “Murder!” One of them, named Robert Eveston, ran out, and saw McKay strike Emily two heavy blows with a piece of paling, which he swung round his shoulder. Both men immediately ran to help her, but finding Emily quite insensible, they removed her to the house, McKay assisting them to do so. In spite of everything that could be done by the neighbours, Emily died in about three hours. McKay stated that he would go and give himself up. However he went to Mrs. Irvine’s public house, and got drunk. He was found there by Senior-constable Steele about half-past 2 p.m., information having reached the Police Camp about 2 p.m. McKay was taken to a lock-up. An inquest was held on Monday on the body of the woman. The Jury returned a verdict of wilful murder against McKay; he was committed for trial at the Beechworth Circuit Court. Henry McKay was found guilty of manslaughter and sentenced to ten years imprisonment.  The local newspaper report pointed to the fact that McKay, through his associations with characters such as Mrs. Herbert, Toke, Mitta Mitta Jack and Harry Power, knew a lot more about the unsolved murder of Soames Davis and some other crimes that had taken place in the district. It was thought that had McKay been sentenced to hang, that he may have given up his secrets!