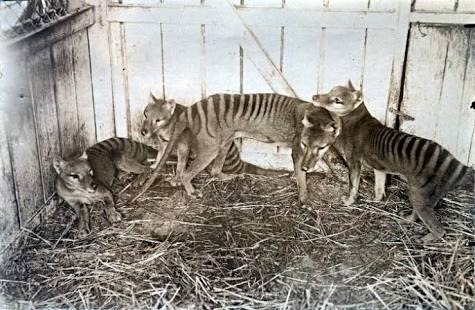 The Thylacine was a dasyurid, or carnivorous marsupial, living in Australia up until the twentieth century. It is believed that the Thylacine existed on the Australian mainland until the introduction of the dingo thousands of years ago. Although the Thylacine was often called the Tasmanian Tiger or Tasmanian Wolf, it was neither of these. Its body was similar in shape to that of the placental wolf, but it was a marsupial, putting it in an entirely different class. It stood 58-60cm tall, with a body and tail length of up to 180cm. When Europeans settled in Tasmania, the Thylacine’s fate was sealed. Farmers shot the creatures, fearing them as a threat to livestock, while hunters prized them as trophies; these acts were supported by the government of the time which offered a bounty of one pound for every dead adult Thylacine and ten shillings for each dead Thylacine joey. This bounty system, introduced in 1830, was not terminated until 1909. By this time, the Thylacine was very rare, and being sought for zoos worldwide. Australian authorities were slow to protect native wildlife, with the result that many species became extinct or on the verge of extinction. In a last attempt to protect the remaining specimens, Tasmania named the Thylacine a protected animal. On the 10th of July 1936, the governor of Tasmania, Sir Ernest Clark, announced that “… in exercise of the powers and authority conferred upon me by the Animals and Birds’ Protection Act, 1928, do, by this proclamation, transfer Native Tiger (Thylacinus cynocephalus) from Schedule 3, Part 1, to Schedule 2, Part 1, of that Act …”. The last known specimen of the Thylacine died in the Hobart Zoo in September that same year. The last captive animals were exhibited in zoos, where their needs were not understood, and the Thylacines in Hobart died from exposure. Despite numerous apparent “sightings” over the years, not one of these has ever been confirmed, and in 1986, the Thylacine was officially classified as Extinct.

Soliciting Arms in the Street