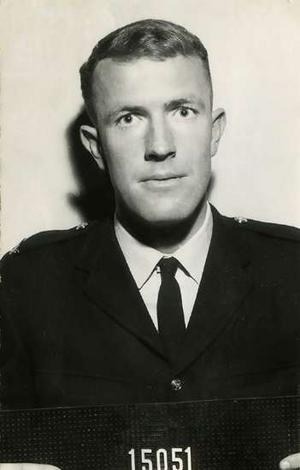 At about 11.30 am on Friday, 13th July, 1979 Detective Lane accompanied David Bernard Chapman, an 18 year old car theft suspect, to a disused bus parked in a camp site at Kyalite, Southern New South Wales. Chapman had been living there for a short time, and had told the Detective he had a receipt amongst his possessions which would exonerate him of the theft.

Whilst Lane searched the bus Chapman took a .22 calibre rifle and shot the Detective in the head. The policeman fell to the floor, and Chapman then walked up and again shot him in the head. He then dragged the corpse to a nearby sullage pit, where he dumped it, before making his escape in the police car, in company with his 17 year old girlfriend Kerryn Anne Bonser.

He later dumped the car in the Edwards River, 5 kilometres away and took to the bush. Despite a massive man hunt he was not located until the 19th uly, 1980 at a property in the Kyalite District. He admitted his guilt, and appeared before Paramatta Supreme Court charged with the murder. On 1st July, 1980 he was sentenced to life imprisonment.