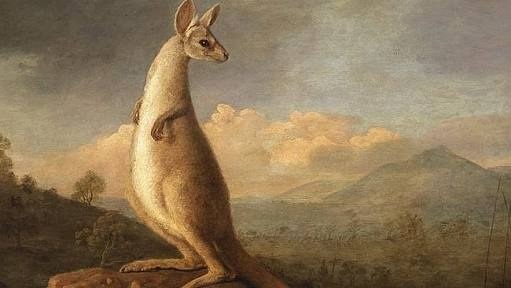 The kangaroo is a native Australian marsupial, of which there are over 60 species. The kangaroo family includes wallabies, tree kangaroos, wallaroos, pademelons, rat-kangaroos and the quokka, all of which are classifed as macropods. Because the larger species – the Red and Grey Kangaroos – are plentiful throughout the continent, the kangaroo has long been regarded as symbolic of Australia. Even though James Cook was not the first European to discover Australia, he and his crew were the first known Europeans to sight the kangaroo. As Cook sailed up the east coast of the continent, mapping the coastline, his ship, the “Endeavour” struck the Great Barrier Reef and nearly sank. The Endeavour was eventually brought for repairs into the harbour formed by the Endeavour River. Landing on the 10th of June 1770, Cook and his crew spent almost two months repairing the ship, allowing botanist Sir Joseph Banks ample time to study the flora and fauna of the area. On the 14th of July 1770, a crewman shot a strange looking, unknown animal. The creature was brought back to the camp site for examination, and the skin eventually taken back to England. The word “kangaroo” is believed to have come from the Aboriginal word gangurru, a Guugu Yimidhirr word referring to the Grey Kangaroo. The word was recorded by Sir Joseph Banks as “kangaru” or “kanguroo” (sources vary). It is not true that the word means “I don’t understand”; this is a popular myth often applied to various other Aboriginal-based Australian words.