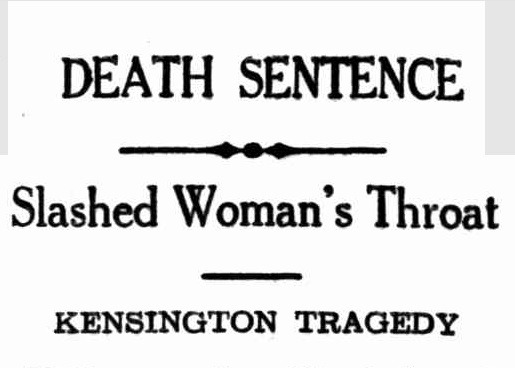 Denying that he killed Mrs Nellie Shears (53), on July 14 last. William Phibbs (47) told a jury in the Criminal Court today that he went to her house about 2.30 and found Mrs. Shears. He spoke to her but she did not answer and he shook her and she rolled to the floor. He then picked up a razor because he thought it might have been his. He then went home and finding blood on his clothes he soaked them and then hid the razor which he found out was not his. He said he had known the Shears’ family for a long time and was on friendly terms with them.

After a retirement of 21 hours a Jury in the Criminal Court today found William Phibbs, 47, of Kensington guilty of the murder of Mrs. Nellie Shears (53) at her home in Tennyson Street, Kensington, on July 14. Phibbs was sentenced to death. The Jury, in finding Phibbs guilty of murder, added a recommendation to mercy on the grounds of his previous good character.