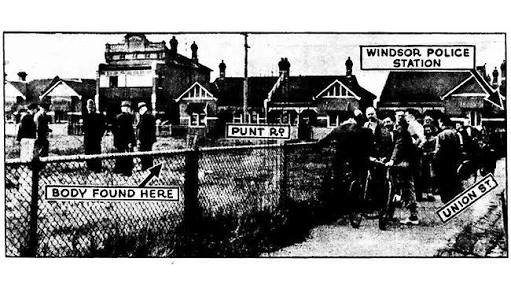 DESPITE an intensive investigation, no evidence had been found to establish responsibility for the shooting of James Coates, 46, on July 19, Detective W. W. Mooney said yesterday at an inquest into Coates’ death. Coates was found dead on a vacant allotment at the corner of Punt rd and Union st, Prahran. There were three bullet wounds in his abdomen and one in his neck. Mr H. B. Wade, PM, city coroner, found that Coates had died from the effects of revolver shots feloniously inflicted by a person or persons unknown.

Chief witness at the inquest was Coates’ widow, Mrs Edith Coates, of Walsh st, South Yarra. She covered her face with a long black veil before entering and leaving the courtroom.Mrs Coates said her husband helped to wipe the dinner dishes on the night of July 19, and then left the flat saying he was going to buy a newspaper. When he did not return she thought he had gone to play cards. She believed he intended to walk and had not known he had been using a motorcar. About two weeks before her husband’s death several anonymous telephone calls had been made to their flat. On each occasion a male voice asked for “Constable Coates.” She did not remember the caller using the words “the police pimp.” On several occasions the caller said she should poison her husband, and that he was going to be shot. Her husband did not tell the police of these threats, nor did he tell her he knew the identity of the caller. Bonnie Joy Bricknell, of Glenhuntly rd, Elsternwick, said she had known Coates for several years. She owned a small sedan car which was found near the allotment where Coates’ body was found. She had frequently lent the car to Coates and lent it to him on July 18, when he said he wanted it for a few days. Louise Lambert, of Murphy st, South Yarra, said she was a shop assistant in a newsagency in Toorak rd. Coates, who was a customer, bought two newspapers in the shop about 7.40pm on July 19. Another man who was in the shop when Coates entered patted Coates on the back and said, “How are you?” They seemed friendly, and left the shop together.

Joan Holding, of Union st, Windsor, said she left home about 9pm on July 19 to exercise her dog. She turned into Punt rd when she heard a shot, which was followed by three more shots. She saw a man jump over the fence at the western end of the corner allotment. The man was wearing a long overcoat. He went into Union st. She then saw two constables run towards the allotment. First-constable Charles White said he was on duty in the police station near the allotment when he heard the shots. He approached two girls waiting at a bus stop and asked if they had heard revolver shots. They said: No, it is only some boys letting off crackers in the paddock.Witness did not see any person leave the allotment, but saw a man leave a lane off Union st and walk toward St Kilda rd.