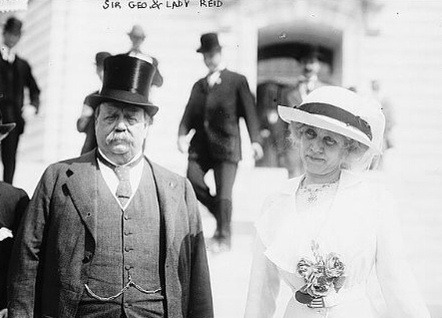 Sir George Reid, High Commissioner for, Australia, (4th Prime Minister of Australia) and members of his family, had a sensational experience this afternoon. As a result of a motor car collision Sir George sustained painful injuries, and his son aid daughter are suffering from shock. Sir George Reid and his family wire spending the week-end at the Grenville Hotel, at Ranisgate, in Kent, and some of the party went out this afternoon for a motor ride. When at the intersection of Gladstone and Ramsgate roads, Broad stairs, about two miles from Rams gate, their car was struck broadside on by another car. Sir George Reid’s car was dashed against a tram standard. The impact was so violent that the High Commissioner’s car was smashed to pieces, and the tramway post, which carried the electric wires, was cracked in two places. Fortunately the post did not fall. Sir George Reid and his son and daughter were picked np in a ‘dazed condition. Miss Reid appeared to be seriously injured, and was taken to a nursing home. It was there found that she was suffering very severely from shock. She is now progressing as well as can be expected. It was at first thought that Sir George Reid and his son were merely suffering from shock, and they returned to their hotel. It was then found that one of the High Commissioner’s arms was broken in two places. A report received late to-night stated that Sir George Reid was progressing favourably.

Death for Murder of Sister