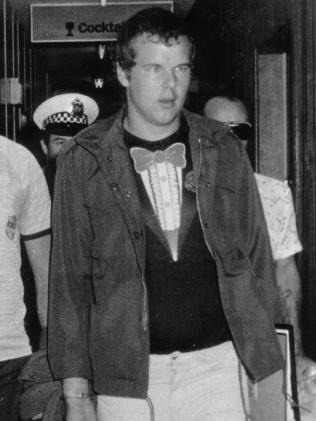 IT is not known the exact number of people the Victoria-born man killed, but he has admitted to at least 13 murders. Albury first came to police attention in 1983 when he used a broken bottle to mutilate an Aboriginal woman, Gloria Pindan, on Mitchell Street in Darwin. Drunk at the time, Albury had taken off his bloodied cowboy shirt and threw it in a nearby bin. It would lead police directly to him. Albury quickly confessed, telling police he kicked her, hit her then used a broken stubbie beer bottle top to cut her. He cut off her nipples and ripped her eye out. Albury claimed he was 15 when he killed his first victim – a 14-year-old boy who he buried under a boat shed on the Mornington Peninsula, and that he was also involved in “family” killings in South Australia. A South Australian fisherman was another victim, who Albury claimed to have hacked to death with a machete before he tossed the body into the Port Adelaide River. He also claimed to have used a bottle of poisoned alcohol to kill three Aboriginal people in the Todd River in Alice Springs in 1981. And he also claimed to fatally stomping sleeping pensioner Alfred Beales in the same river bed. Detectives from New South Wales, South Australia, Queensland and Victoria have interviewed Albury about a dozen unsolved murders since 1976 but most claims had been disproved. One case that Albury admitted to being involved in was the murder of Aboriginal woman Patricia Carlton in Mt Isa in 1983. Carlton’s husband Kelvin Condren initially received a life sentence for the murder, but was released after Albury confessed to killing an Aboriginal woman at the same time. It was later proven that Albury had been in town and left the night of the murder. Supreme Court Justice Martin called Albury an extremely dangerous man with a casual disregard for the act of killing. “He has a fantasy about terrorising a town by committing casual, motiveless murder for the purpose of making people frightened that they may be the next to be killed,” Martin said. A prison psychiatrist described Albury as an above-average intelligence, who enjoys the reputation of a ‘monster’. Being locked away in jail didn’t stop Albury from his reign of terror. Albury put a garden hoe through the head of child molester John Michael Knox, and after being transferred to Alice Springs prison, he struck another inmate in the head with a cricket bat, cracking his skull. He also sent death threats written in blood to Northern Territory ministers. Albury was diagnosed with both psychopathic personality disorder and schizophrenia, which is the reason why he hasn’t been tried for a number of other murders he has confessed to around Australia. His murders have been attributed to his violent upbringing, as well as a hatred of Aboriginal people. Despite spending most of his childhood on the Mornington Peninsula, he had attended Nightcliff Primary School for a short time in his youth but was deemed “uncontrollable”.

Origins of the All Blacks – New Zealand

Murder of a Murderer
Scroll to top Book online now!