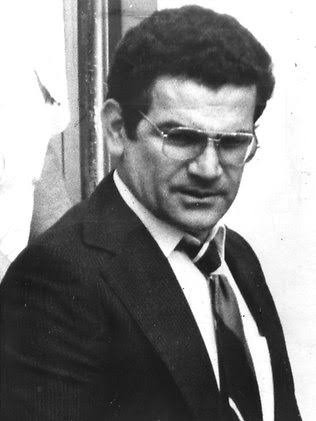 CONVICTED murderer Alex Tsakmakis’s brutal killing earned very little sympathy among his fellow inmates.  Before we was clobbered to death behind bars, he too had carried out a prison killing. Before coming to police attention, Alex Tsakmakis appeared to be a company director and Ivanhoe family man. But his actions made him nothing but pure evil. Tskamakis, 40, was defenceless when he was attacked from behind on July 22, 1988. Taking lunch to a group of prisoners in the maximum security industry yard at about 11.30am, he was beaten on the back of the head by Russell St bomber Craig Minogue, 26. Tsakmakis remained standing at the first blow, but fell on the second. He was hit up to seven times with a pillow case full of 5kg gym weights and suffered a fractured skull and brain damage. Despite being given immediate medical attention and being rushed to hospital, he died six days later. Minogue received a second murder conviction but because he is serving it concurrently with his Russell St bombing sentence he has been given just three more months for Tskamakis’s death. The sentencing judge, Justice George Hampel believed Tskamakis’s life was not worth any more than that. At the time Minogue said he had killed Tskamakis in self defence because feared he would have been Tsakmakis’s next victim. Minogue will be eligible for parole in 2016.

ANDY ALBURY AKA THE NORTHERN TERRITORY’S OWN HANNIBAL LECTER