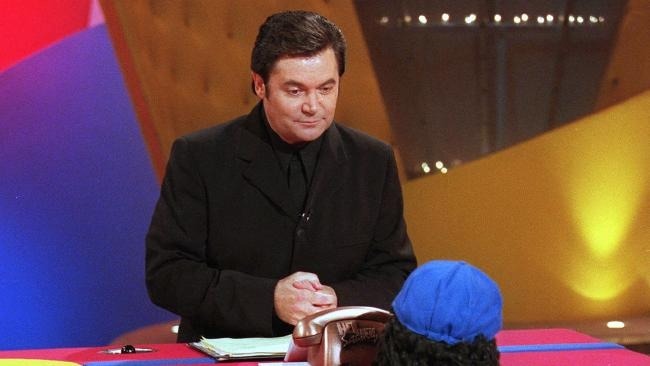 Some of Dickie Knee’s greatest moments
DICKIE Knee has opened up about his 29 years on Hey Hey It’s Saturday, revealing what Daryl Somers is really like and which celebrity guest was the best to work with.
In a world exclusive (to be fair, no one else was really chasing him), the cheeky schoolboy also spoke to news.com.au (with the help of John Blackman) about a possible return to TV. Here are the highlights of our chat with the pint-sized Aussie star:
Where are you these days Dickie?

“I spend most of my time in the boot of Mr Blackman’s car. Sometimes he gets me out and uses me as a dipstick.”

Do you look the same or have you aged?

“Nothing has changed, not even my face which is horribly disfigured after a very nasty cooking incident where I asked mum if I could lick the beaters of her mix master and she let me and then accidentally turned it on.”

“I don’t miss it personally but Mr Blackman’s accountant does and his wife does and his entire family does. He has three dependants: his wife, me and the Australian Taxation Department.”

“He could read this couldn’t he? Well in that case he was an absolute honey to work for. He was a sweetheart, a very kind, considerate, generous person.”

What about Red Symons?

“He’s the same off camera as he is on camera. I can’t say any more than that.”

“Ah Molly, my arch-enemy. We still have a love/hate relationship.
“I was really concerned when he fell off that ladder a couple of years ago when he was putting up his Christmas decorations. But you’ll be happy to know, he’s back and he’s now actually able to put words together and form sentences which is really weird because he couldn’t do that before the accident.”

Who was your favourite celebrity guest on Hey Hey?

“Probably Kylie Minogue, mainly because she’s about the same height as me and she talks like me too.”

“Sheena Easton (singer). She was very grumpy. In fact she was on Hey Hey one day and she punched me right in the eye. I had a Sheena shiner for about a week.”

What was the best line you ever came up with on the show?

“I think my best line was when Mr Meldrum was on one day and he had Shirley Strachan (Skyhooks singer) on and they were doing Molly’s Melodrama and they were both dressed exactly the same.

“Shirley had a Molly Meldrum mask on and a hat so I stuck my head up and I said to Mr Meldrum, ‘I told you this would happen if you didn’t chlorinate your spa’.”

“Can I help you with something Dickie?”
Are you still available for work these days?

“Dickie knee is available for fabulously well-paid national television commercials if anybody’s interested… and I work cheap.”
And the big question, will Hey Hey It’s Saturday make another TV comeback?
“We can’t say too much at this stage but we are in talks with Channel 31.”