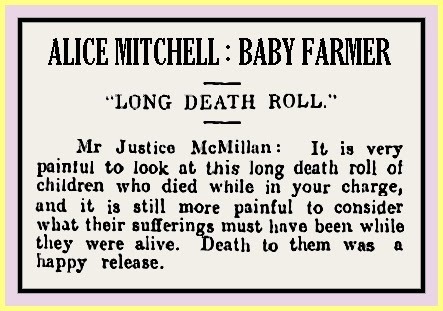 Alice Mitchell, a nurse and midwife, had been registered since 1903 with the Perth Local Board of Health to take charge of infants. Babies were boarded at her premises in Edward Street East Perth while their mothers worked to support themselves and pay for their children’s care. The case came to light after Mitchell was reported by a constable on duty in the neighbourhood when she casually mentioned during a conversation that she had a child lying ill in her house but could not afford a doctor. The police called Dr Davey to attend a 10 month old child who was in “an exceedingly emaciated condition”, and while at the house Dr Davey noticed a baby, Ethel Booth, who was in a similar condition. Both children were taken to Perth Public Hospital but little Ethel was too far gone and died the next day. At Ethel’s inquest her mother Elizabeth testified she gave birth to Ethel at the House of Mercy, a maternity home for unmarried mothers, and stayed to look after her baby for a further two months. Elizabeth then 16 resumed her occupation as a maid, for which she earned 15s a week, and relinquished her child into Mitchell’s care after agreeing to pay 10s. per week as well as any doctor’s fees. Elizabeth loved her daughter and had become increasingly concerned when Mitchell, with various excuses, had repeatedly prevented Elizabeth from visiting her baby.
As part of her conditions of registration Alice Mitchell was required to keep a register of infants placed in her care but there were no entries after 16 December 1904. Evidence given at the inquest revealed that the female Inspector for the Perth Road Board was apparently friendly with Mrs. Mitchell, and would chat at the door, but never went inside to visit the children or inspect the register. Dr Officer visited regularly, charging five shillings for each child seen, and had examined baby Ethel three days after her arrival, declaring she was in a very healthy condition. At the murder trial Edward Officer, while admitting he had signed 22 death certificates of babies dying at Alice Mitchell’s house, denied “that death was in any way assisted or was due to other than natural causes”. In further evidence the local Anglican priest, the Reverend Robert John Craig, testified going to Mitchell’s house to baptise a dying nine month old child, Harry Turvey. Craig noted that the baby was very thin and had an offensive smell. Just over a week after little Harry’s death, Craig was sent for again and complained that the children he saw were very smelly and criticised Mitchell’s ability to keep the children clean. Nevertheless he clearly did not feel the need to report the matter. Seemingly, no one in authority picked up on Mitchell’s treatment of the infants she had been paid to look after, and as the trial progressed, revelations emerged that over the six years she had been fostering babies, at least 35 had died in suspicious circumstances. As well as ‘baby-farming’ Alice Mitchell also ran a boarding house and another witness, Carl Roux, testified that he stayed there for a month late in 1906 and that Mitchell always had several fostered infants who apparently all slept in the same room as she. Roux said that he had overheard Mitchell’s adult daughter complain to her mother of the dirty state in which the house and the children were kept adding, ‘’Those people in the front room [Roux and his wife], know just as well as I do that you kill the babies.” Despite this, Roux did not feel obliged to alert anyone else. He also told the court that before the trial Mitchell told him that that if she fell, Dr Officer would have to fall too. The trial concluded on 13 April 1907 and the jury, after less than an hour, found Mitchell only guilty of manslaughter. The Judge in passing sentence of five years hard labour remarked that the jury concluded that Mitchell had no intention of killing baby Booth, but that her death was caused by criminal negligence. He told Mitchell; “… you have been, like many other women who carry on the same business, perfectly callous to the sufferings of these children who were entrusted to your care. All that can be said in your favour is that you are a woman getting on in life, and, therefore, whatever term of imprisonment I may pass upon you will affect you much more severely than it would a younger woman”. Alice Mitchell was lucky, for in a similar case in Victoria where a woman was convicted of the deaths of infants in her care, she was executed. No blame was attached to Dr Officer and no others were charged with neglect of their official responsibilities. The two inspectors were the only ones to suffer any sort of fallout from the case when the Perth Road Board decided to dispense with their services. It was difficult for people to accept that such cruelty could occur unnoticed in their small Perth community. Public outcry over the Mitchell case brought into focus the need not only to protect vulnerable children, but to ensure that all mothers and their infants were healthy and had access. to good medical, midwifery and obstetric care. Some very influential women took up the cause and the formation in 1909 of the Women’s Service Guild, led by women who had been active in other women’s organisations, crystallised the momentum for the establishment of what was to become the King Edward Memorial Hospital for Women.