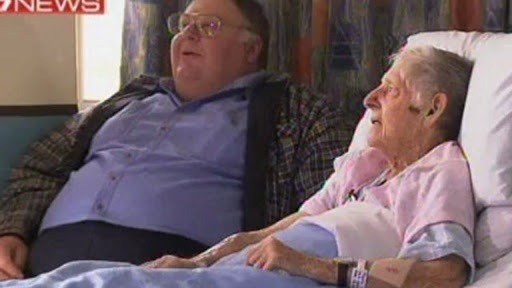 Two Australian police officers in Canberra, used pepper spray to fight off a rogue kangaroo that had attacked an elderly woman in her backyard in an Outback town, on this day in 2011. The 94-year-old victim, Phyllis Johnson, was taken to a hospital for treatment for cuts and bruises after the attack Sunday afternoon. She told The Courier Mail newspaper that she tried unsuccessfully to fight the kangaroo off with a broom after it attacked her while she was hanging her laundry. “I thought it was going to kill me,” she told the newspaper from her bed in Charleville Hospital on Monday. “It was taller than me and it just plowed through the clothes on the washing line straight for me.” She said the kangaroo knocked her to the ground before she crawled to her house, where her son called police. Perkins said the first police officer to reach the backyard was forced to spray the kangaroo to avoid being injured. “The animal jumped away, then saw another officer at the back of the police car and went for that officer, and he also had to deploy his capsicum spray – so the roo had to get sprayed twice,” he said. “After that, it hopped away from the scene, but police could still monitor its location – it didn’t go too far.”