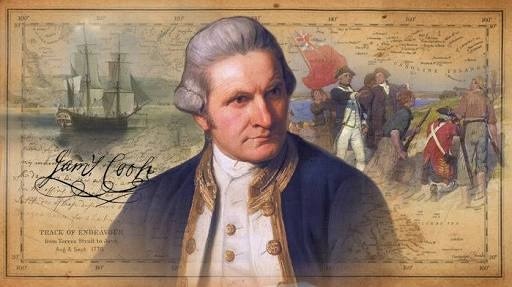 In 1768, Lieutenant James Cook was commissioned with the task of observing the transit of Venus across the sun from the vantage point of Tahiti. This expedition was originally commissioned by the Royal Society of London as a scientific mission. However, when the British Admiralty became aware of Cook’s expedition to the Southern Hemisphere, Cook was given an extra task – one which, it was hoped, would see the advancement of the British Empire and acquisition of more territory.
On the 30th of July 1768, shortly before HM Bark Endeavour departed England, Cook was handed his orders. They were in two parts: the second section was sealed, and could be opened only by Cook once he completed his observations of Venus. Entitled “Secret Instructions for Lieutenant James Cook Appointed to Command His Majesty’s Bark the Endeavour 30 July 1768”, the instructions commanded Cook to find the Great South Land, a ‘Land of great extent’ that was believed to exist in the Southern hemisphere. Although the continent of Australia had been discovered by the Dutch in the early 1600s, it was not thought to be “Terra Australis Incognita”, or the mysterious “Unknown Southern Land”. Cook was instructed ‘… to proceed to the Southward in order to make discovery of the Continent above-mentioned until you arrive in the latitude of 40º, unless you sooner fall in with it’. He was then ordered ‘with the Consent of the Natives to take possession of Convenient Situations in the Country in the Name of the King of Great Britain’. In essence, Cook was awarded the power to consign any indigenous inhabitants of the Great South Land under the King of England’s authority.