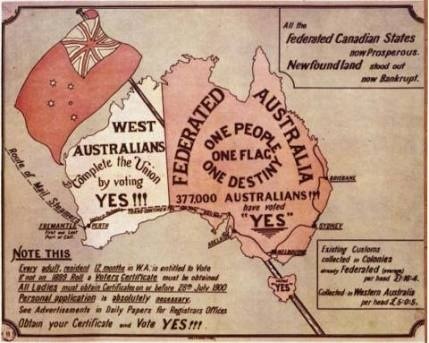 Australia was under British rule from the time the First Fleet landed, in 1788, until 1901. Numerous politicians and influential Australians through the years had pushed for federation of the colonies, and self-government. After not being accepted by the states the first time, the amended Commonwealth Constitution was given Royal Assent on 9 July 1900. Western Australia held back from agreeing to join the federation, as Premier and former explorer John Forrest wanted to ensure the economic security of the state, given its distance from the more highly populated eastern states. Western Australia itself was divided over the decision to join, as the people of Albany pushed to be included as part of South Australia, rather than aligning themselves with Perth and Fremantle. Despite this, Forrest’s 31 July 1900 referendum on whether the Western Australians wished to join the rest of the commonwealth was resoundly accepted throughout the state. Even in Albany, 914 voted “yes” and 67 voted “no”.