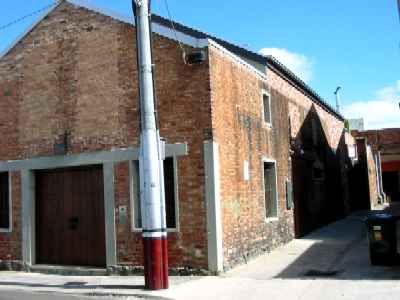 At the City Court, Melbourne, yesterday two men were charged with murder appeared and were remanded. Cyrus Braby, charged with the murder of William Southwick, estate and commission agent, at South Yarra on August 1, was remanded till Wednesday, pending the inquest to be held to-morrow.

Cyrus Braby arrested on Sunday, and charged with the murder of William Southwick at South Yarra, was brought before the City Court yesterday, and remanded until August 10.

Braby, dirty and unkempt, stared vacantly round the court during the proceedings, and seemed to take no interest in what was going on. Constable West, in reply to a question by Mr. C. Burnet, said that the police had no doubt that the accused was quite mad.

A charge of vagrancy was withdrawn, and Braby will bo submitted to mental observation in gaol.

Constable West gave evidence of the arrest of accused. After the discovery of the body, the police had evidence that about noon on Saturday a violent argument took place between the dead man and accused, after which Southwick was not again seen alive.  Accused, when arrested, was sleeping.

Martin Braby, father of Cyrus Braby is 73 years of age, and was formerly a Justice of the peace at Ravenswood goldfields, Queensland, and at Eskdale, Victoria, where he was wellknown as a storekeeper.

Braby said his son, the youngest of four, left Victoria on active service in 1916, the most youthful member of the Heavy Siege Artillery. Being only 19 years of age, he had special permission from the Minister of Defence Mr. Pearce to join this, section of the A.I.F., as he desired to take the place of a brother who, being then in the Garrison Artillery, would have left with the heavies, but was killed by a tram just before the outbreak of the war.