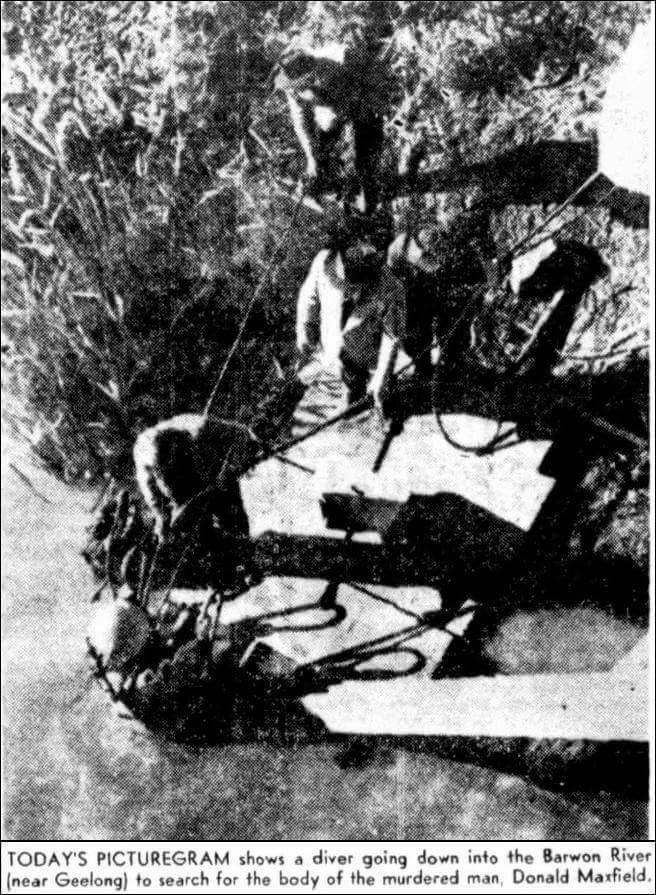 Donald Maxfield was reported missing from Colac on the 13th of May, 1953. He was a 22 year old labourer. On this day in 1953, the torso of a man was pulled from the Barwon River. Divers would eventually find the rest of Maxfield’s body, which had been dismembered and placed in kerosene tins and sunk in the Barwon River. It was believed the Maxfield was attacked and bashed in a garage in Colac by Andrew Kilpatrick and Russell Hill, aged 33 and 22 respectively, both from Colac. The men had placed the unconscious body of Maxfield in the boot of a car and had driven to Geelong. Maxfield regained consciousness and was again bashed to death on the banks of the Barwon. It was reported that this was a payback as it was believed that Maxfield had spoken to police about some of Kilpatrick’s dealings
Kilpatrick and Hill were arrested on the 1st August 1953 for the murder of Maxfield. Hill had confessed that with Kilpatrick, they had beaten Maxfield to death with an iron bar and then dismembered his body and thrown it in the Barwon. Information from Hill led to the divers recovering the torso after a 5 hour search of the river. The torso had been covered in an oat sack, wrapped in wire and weighed down with stone weights so that it was roughly 100lbs. The head and hands were later discovered in kerosene tins in the river. Both men were charged with murder and sent to trial in October 1953. Both Kilpatrick and Hill were sentenced to death. This was later commuted to life imprisonment with no remissions for Kilpatrick and 20 years with no remissions for Hill. Kilpatrick served his sentence in Pentridge, where he was a notorious figure because of his crime. He later became an ideal prisoner and was released on parole in 1976 after serving 23 years. Hill served his 20 years in the Geelong Gaol working in the prison library and other jobs.