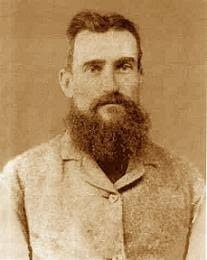 Despite dubbing himself with a title more fitting for a comic book hero than an Australian bushranger, ‘Captain Thunderbolt’ Frederick Ward recruited children for armed holdups and shootouts with police. Originally a drover from Paterson River, New South Wales, Ward was charged with horse thievery and sent to Cockatoo Island, Sydney harbour in August 1856 to serve 10 years of hard labour. After escaping on 11 September 1863, he settled into a life of armed robbery. Among Ward’s juvenile accomplices was 16-year-old John Thomson, who was shot and captured by police during an armed robbery, 16-year-old orphan Thomas Mason, who was captured by police and convicted of highway robbery, and 13-year-old runaway William Monckton. On 25 May 1870, Ward was shot-dead by Constable Alexander Walker at Kentucky Creek, Uralla.