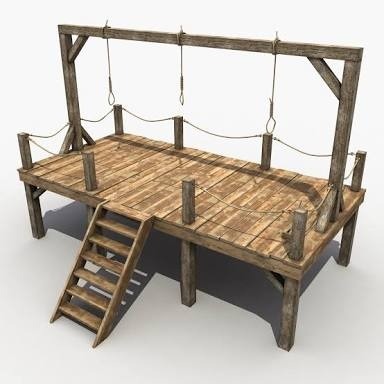 On Wednesday morning at nine o’clock the sentence of death was carried into effect upon Christopher Harrison, Samuel Woods and William Carver, convicted at the late criminal Sittings of the Supreme Court in Melbourne, —Harrison, of murder and the others, Woods and Carver, of robbery in company of wounding. Since their condemnation the three prisoners have been visited by ministers of various denominations, and it may be hoped that both Harrison and Carver profited by the consolations of religion; but in case of Woods both Protestant and Catholic clergymen failed to make an impression, and he refused to join in any devotional exercise, saying he could not give his mind to the subject. The Very Rev. the Deane of Melbourne, the Rev. R. N. Woolaston, the Rev. Geo. Mackie, and the chaplain of the gaol, the Rev C. Studdert, were all in attendance on the prisoners yesterday morning.  Prior to the prisoners being brought out, the sheriff mentioned to the persons assembled (about fifty in number) that on the last similar occasion (the execution of Barrett) there had been an indecent exhibition of crowding forward on the part of the spectators, and he begged that this might not be repeated saying at the same time, that if it were he should order the gate of the yard (where the gallows stands) to be closed against them. The hour having arrived, Harrison was the first to leave the cell, and prior to being pinioned, addressed the spectators for five or six minutes in a firm tone of voice, stating he did not complain of the judge, the jury or the law which had condemned him to die. He had no fear of death, but he could not believe he had committed any very great crime; he had only done what other men would have done in his place. He also made a rambling statement about the ad mixture of prisoners of various degrees of crime in the gaol. He said he had endeavoured all his life to do good to society. and would never willingly have done a man an injury. He wished that his body should be given to Professor Halford.

Woods was next brought out and pinioned. He expressed himself bitterly against Jeremiah Phillips alias James Naylor, of Tasminia, and said if he had had in his cell the previous night the two wretches, Phillips and Anderson, that had left him in this, he would have done something to be hanged for. He said he considered they had no right to hang him for he had not committed any murder; and he prayed a fearful imprecation on his head if he intentionally fired the pistol.  Carver, on being brought out, said that he forgave his enemies and hoped for forgiveness himself. He had before his trial objected to a cast of his head, or pictures of him in the newspapers, but now he hoped it would be done, that he might serve as an example. He hoped his punishment by death would make some atonement for the life he had lived.  Woods again spoke, and said he blessed his friends and cursed his enemies. He then in a loud voice, sang a verse of four lines, altered by himself to introduce his name. The behaviour of this man, was offensively unsuited to the solemnity of the occasion and altogether the scene in the corridor of the gaol was of an unusually painful description, two of the condemned showing rather submission than resignation to their fate. The criminals having arrived on the scaffold before the final preparations were concluded, both Harrison and Woods expressed themselves grateful for the kindness they had received from the Governor and the officers of the gaol, Harrison particularly mentioning that he knew they could have put irons on his legs, but Mr. Wintle had forborne to do so. At about quarter past nine o’clock the drop fell and the men died instantly. Harrison never moved at all.