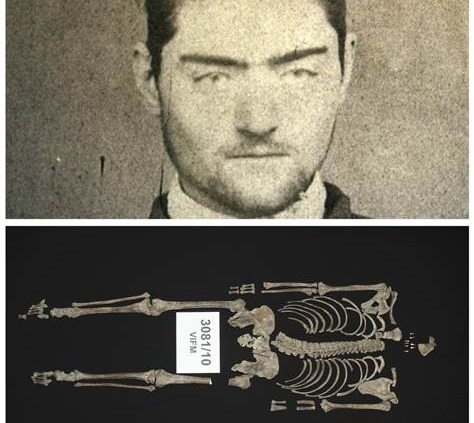 The headless remains of Australia’s most infamous criminal, Ned Kelly, have been identified. Victoria state Attorney General Robert Clark said that a team of forensic scientists identified Kelly’s remains among those exhumed from a mass grave at Pentridge prison in Melbourne in 2009. Kelly led a gang of bank robbers in Victoria in the 19th century. Today he is considered by many Australians to be a Robin Hood-like figure who stood up to the British colonial authorities of the time. He was executed in 1880, but his final resting place had long been a mystery. “To think a group of scientists could identify the body of a man who was executed more than 130 years ago, moved and buried in a haphazard fashion among 33 other prisoners, most of whom are not identified, is amazing,” said Victoria Attorney General Robert Clark. The Sydney Morning Herald reported that investigators revealed that an almost complete skeleton of the outlaw was found buried in a wooden ax box. Clark said DNA analysis and other tests were used to confirm the skeleton is Kelly’s. The Morning Herald said DNA samples were taken from Melbourne school teacher Leigh Olver, who is the great-grandson of Kelly’s sister Ellen. Kelly’s skull was stolen from a display case at the Old Melbourne Gaol in 1978. A 2009 claim by a West Australian farmer, Tom Baxter, that he had Kelly’s skull was eventually rejected, but led to the investigation that uncovered his bones. The Morning Herald said that investigators believed that Kelly’s remains were transferred from the Old Melbourne Gaol to the Pentridge prison in 1929, then exhumed with the remains of 33 other people during the investigation in 2009. Baxter had handed the Victorian Institute of Forensic Medicine what he said was the stolen skull, which featured the inscription “E. Kelly” on its side — Kelly’s actual first name was Edward. Baxter has not revealed how he got ahold of the skull. Scientists at the institute set out to determine who the skull belonged to, and to identify Kelly’s full remains among the tangle of skeletons exhumed from the Pentridge site. Through CT scans, X-rays, anthropological and historical research and DNA analysis, the team finally identified one skeleton as Kelly’s. Most of its head was missing. Stephen Cordner, the institute’s director, said the DNA left no doubt the skeleton was Kelly’s. Tests on the remains also uncovered evidence of shotgun wounds that matched those Kelly suffered during his criminal rampage. “The wear and tear of the skeleton is a little bit more than would be expected for a 25-year-old today,” Cordner said. “But such was Ned’s life, this is hardly surprising.” As for Baxter’s “E. Kelly” skull? Not Ned’s. The whereabouts of Kelly’s skull remain a mystery, Cordner said. Descendant Olver told reporters in Melbourne that he hoped his notorious ancestor will finally be laid to rest in a place of dignity. “It’s such a great relief to finally have this side of the story resolved,” Olver said. Kelly’s story has been documented in several books and movies, including a film starring Rolling Stones frontman Mick Jagger and another starring late actor Heath Ledger. Kelly’s use of homemade armor to protect himself from police bullets was even given a nod during the 2000 Sydney Olympics, when actors on stilts dressed in similar armor were featured in the opening ceremony. “I think a lot of Australians connect with Ned Kelly and they’re proud of the heritage that has developed as a result of our connection with Ned Kelly and the story of Ned Kelly,” Olver said. “In our family, he was a hero.”