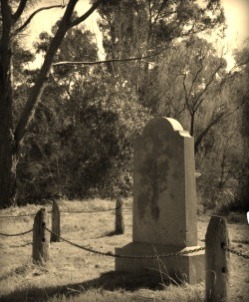 A memorial erected over his grave commemorates Henry Facey Hurst who was shot and killed by the bushranger Robert Burke in 1866. Henry was a pioneer settler of Hurstbridge where he built the first log bridge over the Diamond Creek so giving the township its name. On 4 October, 1866, Robert Burke, alias McClusky arrived at Allwood and asked Ellen Hurst (Henryand#39;s sister) for breakfast, and later a horse. She sent for Henry, who questioned Burke. When Henry reached for his gun, Burke shot him. Despite the wound, Henry held Burke until help arrived. He subsequently bled to death. The jury found Burke guilty of wilful murder`, with a recommendation to mercy, on account of Hurst having fired the first shot. Robert Burke was sentenced to death . A public meeting was held at the Melbourne Mechanics Institute on the evening of Monday 26th November to adopt a petition with over 2,000 signatures, for submission to the Executive Council, asking for the death sentence to be commuted to imprisonment for life. Some ten days after the trial the sentence was carried out. Robert Burke the bushranger, aged 24 years, was hanged at the Melbourne Gaol on Thursday 29th November 1866.

Front Inscription:
‘Sacred to the memory of Henry Facey Hurst (formerly of Hanford Dorset) who while defending his home fell near this spot by a ball fired by the bushranger Burke on October 4th 1866 aged 34 years’.

This memorial was erected by a grateful public as a memorial of his heroic self sacrfifice.