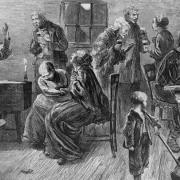 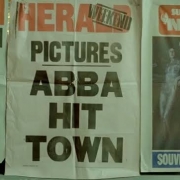 ABBA: The Movie is a documentary cult film about the Swedish pop group ABBA’s Australian tour in 1977. Directed by Lasse Hallström, who directed most of the group’s videos.  Its release coincided with the release of ABBA: The Album, the group’s fifth studio album, and features many songs from that album as well as many of their earlier hits, and one, “Get on the Carousel”, unavailable anywhere else.

The film has a very thin plot which is no more than a vehicle to link together the concert footage. Hallström indicated that the film’s script and plot concept was conceived on the plane on the way to Australia.

The plot centres around the adventures of Ashley Wallace (Robert Hughes), a DJ on a Sydney Radio station. Ashley normally presents a through-the-night country and western-themed show. In spite of this, he is sent by his boss (Bruce Barry) to get an interview with the ABBA.  Ashley, who has never done an interview before, singularly fails, mainly because he has forgotten to pack his press card, and is also unable to buy a concert tickets. Armed with his trusty reel to reel tape recorder, Ashley is forced to follow the group all over Australia.  From Sydney to Perth, Adelaide, and Melbourne, Ashley experiencing repeated run-ins with the group’s bodyguard (Tom Oliver).

During filming, the members of ABBA were not told of the storyline involving a journalist Ashley (Robert Hughes) seeking an interview. ABBA believed that the reporter was a real newsman trying to get a scoop.

Eventually, Ashley has a lucky chance encounter with the group’s manager, in the foyer of The Old Melbourne Motor Inn, 17 Flemington Rd, North Melbourne, where ABBA was staying.

The manager agrees to arrange an interview. But Ashley sleeps in and misses the appointed interview time. Just as Ashley has given up, a miracle occurs: he steps into an elevator and finds himself face-to-face with ABBA. They agree to give him an interview there and then in room 604, and he leaves Melbourne just in time to meet the deadline for the radio show to go out on-air.

He puts together the final edit in the back of a taxi on the way back from the airport, as ABBA depart Australia for Europe. With only minutes to go, Ashley makes it back to the radio station where, having set the tape up on the studio’s playback machine, he relaxes at his control desk to listen as the interview is broadcast.

The production shoot went for six weeks and encompassed ABBA’s 1977 Australian tour and included their live concerts, press conferences, private downtime, public receptions, meeting fans and traveling time. Mostly filmed in Australia, however additional filming was done during the of Summer 1977 in ABBA’s home country of Sweden after their concert tour of Australia had been completed. This filming included “The Name Of The Game” dream sequence and filming on streets in Sweden, doubling, ironically, for the streets of Melbourne and Sydney. Actors Tom Oliver and Robert Hughes had to fly to Sweden for these shoot. Noticeably different from Australia are the street signs and the traffic flowing on the right hand side.

Most of the concert footage used for this film came from their five Perth concerts in Western Australia. This was because the concert venue there, the Perth Entertainment Centre, was the only indoors stadium on the tour, and the conditions there were best suited for acoustic recording and would not be affected by any bad weather elements.  In these screens Agnatha Fältskog was frequently filmed above the neck in close-ups due to disguise the fact that she was pregnant at the time.  There is a brief scene shot at the Parmelia Hotel in Perth where a photographer asks for a smile, ABBA at the time was surrounded by various International stars that happened to be in Perth at that time of filming. They include Gerry and the Pacemakers, The Searchers, The Dubliners, Alice Cooper, Stephane Grappelli and British actor Robin Nedwell.

The film had three simultaneous World Premieres all held in Australia on 14 December 1977, in Paramatta and Sydney New South Wales and Melbourne, Victoria.  At the time of this film’s theatrical release, Stig Anderson said ABBA’s enormous popularity in Australia, where this concert movie was filmed: “Australia is still the biggest market in the world for ABBA. People in the music industry all over the world have been stunned with what has happened here.”  The film was also released Scandinavia and several Eastern Blotic Nations, including the Soviet Union where it was screened at two movie houses in Moscow.

In 2003, The Swedish Film Institute restored the film to its original soundtrack after the original stereo sound had been lost for years. The film was premiered in its new version on the 2nd of December 2003, at Stockholm’s Film House with Bjorn Ulvaeus and Benny Andersson attending. Bjorn said of this film: “They wanted us to make a film in Australia, but quite honestly I don’t think that films with pop stars work very well. Of course The Beatles are an exception and Tommy (1975) was a big hit but there have been lots of other pop films that have sunk without trace. Seeing the film came as a bit of a shock. It’s hard to recognize yourself up there on a giant screen in Panavision. But then we’ve had many moments when it has been hard to accept the things that have been happening to us.”

A theatrical re-release of the film occurred across Europe during July and August 2008 in the UK, Ireland, The Netherlands, Norway, Germany, and Austria. 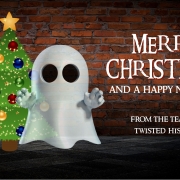 2018 has been a big year for the team at Twisted History!

And we could not have done it without our customers who come week in and week out to our range of tours across Victoria.

In November we were extremely proud to take away the bronze award for Cultural Tourism in the Victorian RACV Tourism Awards.

We continued to be accredited for the third year, one of only 2 “ghost” tour companies in Australia.  This means we maintain a business standard that allows as to use the national tick.

2019 will see the introduction of at least one new tour with the Castlemaine Cemetery tour beginning in mid January with our miner Andrew O’Reilly and schoolteacher, Miss Myrtle!

We have already locked in a range of dates for our haunted hotel tours, with negotiations continuing with a couple more.

Our murder tours will see Chinatown take on a more “ghostly” focus and will see the introduction of a new guide.  Carlton and Melbourne tours will continue as required.

Geelong Gaol will be back with a ghost tour and an investigtion tour tomorrow night (26/12).  We have a new longer investigation planned for later in the first half of the year.  We will also be expecting some special interstate guests around Easter – now to find a cool location to investigate near Geelong!

Besides all this, with our newly vamped website up and running, we are hoping to bring back our regular blog – not daily unfortunately as we have been too busy!  But we will have some new content up in the new year!

But thats enough from me for now!

So the team at Twisted History would like to wish each and every one of you a very Merry Christmas and a Happy New Year.  We hope to see you somewhere on a tour in 2019!