We came across a reference to an unusual murder case the other day. And although it isn’t Australian, there is very definitely some Twisted History to it!

Pype Hayes Park in Erdington, Birmingham, England has been the scene of two murders – one in 1817 and another in 1974. Now you might not think that is particularly interesting but the parallels between these two cases is uncanny!

On May 27, 1817, the belle of the parish, Mary Ashford attended a dance at Tyburn House Inn with her friend Hannah Cox. The two young ladies left around midnight and would return to Hannah’s house.  Mary would leave and would not be seen alive again.  Her body would be discovered a few hours, where a worker discovered a puddle of blood and two sets of footprints leading to the muddy ditch.  Mary had been sexually assaulted and left to drown.

On May 27, 1974, childcare worker Barbara Forrest spent the night out dancing with her boyfriend at various pubs before he escorted her to the Colmore Circus bus stop.  It would be the last time anyone saw Barbara alive.  Her semi-naked body was found under bracken in a shallow ditch just 500 yards from her house on the edge of the park.  Barabara had been raped and strangled.

Two men would be arrested, one for each crime – Abraham Thornton in 1817 and Michael Thornton in 1974.  At their respective trials both men would be acquitted for lack of evidence.  In 1817, Abraham admitted to having sex with Mary but 3 witnesses gave him an alibi which saw the case dismissed.  In 1975, Michael was arrested after blood stains were found on his pants and an alibi proved false.  The case was dismissed.

Both cases remain officially unsolved to this day.

But there are a few interesting facts related to the 1817 murder. Firstly, Abraham Thornton’s boot print was matched to those leading to Mary’s body.  It was one of the earlist recorded cases of footwear identification.  Secondly, after the dismissal of the first trial, Mary’s brother William launched an appeal stating the evidence was overwhelming against Thornton.  Thornton was rearrested and claimed the right to trial by battle – a medieval law that had never been repealed by Parliament.  Ashford declined and Thornton was freed from custody.  The law was repealed in 1819.

But we will leave the final words to Mary Ashford’s family.  On her grave in Sutton Coldfield Churchyard is the following inscription: 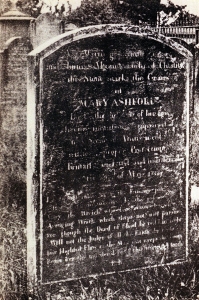 “As a warning to female virtue and a humble monument to female chastity, this stone marks the grave of Mary Ashford who on the twentieth year of her age having incautiously repaired to a scene of amusement without proper protection, was brutally murdered on 27th May 1817”

Against the Wind (1978)
Scroll to top Book online now!