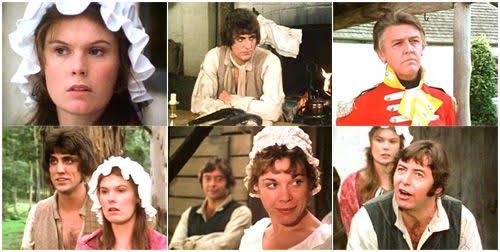 Against the Wind is a 1978 historical drama television mini-series based on the British rule of Ireland and the transportation of convicts to New South Wales. The  production was the most challenging historical series to be produced for television in Australian at the time.

The show was produced by Crawford Productions and Pegasus Productions and ran for 13 episodes, first airing on the 12th of September to the 31st of October 1978, on the HSV7 Seven Network. The series was the idea of Bronwyn Binns, who had grown up in President Road, Kellyville, New South Wales, where she had found old convict remnants on the family property. Kellyville is not far from the site of the colonial Vinegar Hill uprising also known as the Castle Hill convict rebellion.

“As a child one heard stories of the convict days and the Castle Hill Rebellion’, Bronwyn Binns recalls. ‘I used to play among some old stone ruins near an orchard, where an iron ring was set in a crumbling wall. I now believe that this was all that remained of the Castle Hill prison farm”. She remembers her father working on their house at Kellyville and discovering some very old brickwork. On one of the bricks was the mark of a broad arrow. “During my research for ‘Against the Wind’, I discovered that the original house on the site had been visited by the Castle Hill rebels the night of the uprising”, she said.

Bronwyn worked as a researcher at Crawford Productions in Melbourne and had developed the project over a number of months,  Bronwyn teamed up with Crawford’s colleague Ian Jones and presented it to Channel Seven, who agreed to finance a series. The series was directed by George Miller and Simon Wincer.

Set in Australia’s colonial era between 1798–1812, the series follows the life of Mary Mulvane (Mary Larkin), a daughter of an Irish school master. At 18, Mary is transported to New South Wales for a term of seven years after attempting to take back her family’s milk cow which had been seized by the British “in lieu of tithes” to the local proctor. Mary endures the trial of a convict sea journey to New South Wales and years of service as a convict before her emancipation and life as a free citizen. During the journey out she makes a lifelong friend of fellow Irish convict, Polly McNamara (Kerry McGuire), and in the course of the series we see their friendship continue, Polly’s relationship and life with taverner Will Price (Frank Gallacher) develop, and Mary’s relationship with Jonathon Garrett (Jon English) a fellow convict grow, leading to eventual marriage when both have served their term. Together they face the difficulties of establishing a farm and a young family in the new country, and must deal with the tyranny of the corrupt military running the colony.

The series was filmed at Old Sydney Town near Gosford, and at Belgrave Heights, Warrandyte, Colac, Geelong and Emu Bottom homestead at Sunbury.  It had a budget of over a million dollars. The series was a large ratings success, being the second most popular show on Australia in 1978, being seen by 2,174,000 people in four cities and was the first major Australian TV production to be broadcast in the United States market.

Further success was at the 1979 Logie Awards where Jon English won the “Best New Talent” for his role in the miniseries as “Jonathan Garrett”.

A soundtrack for the series was released by Polydor Records, and the song Six Ribbons written by Jon English was released as a single. Six Ribbons entered the Kent Music Report on the 5th of December 1978, before peaking at number 5 on the Australian charts in 1979. The song peaked at number 1 in Norway and 10 in Sweden in December 1981.

Channel Seven released a remarkable 70-page book relating to Against the Wind, comprising historical background notes, character biographies, and the detailed storylines with drawings of props and costumes.