William George Bruhn entered the Geelong Gaol on 3 December 1930 for a 6 month imprisonment.  It is Geelong’s connection to one of the more infamous criminal families – the Bruhns 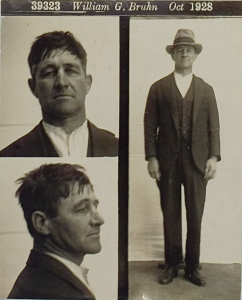 On December 2, 1930, William parked his car in a lane near the railway line in Lethbridge.  In the car was a crowbar, gelignite, fuses, detonators and blankets. The men were waiting for the goods train from Ballarat to Geelong to pass but had aroused the suspicions of the locals who called the police.  William and two other men with him were charged with loitering with intent to commit a felony and each given 6 months imprisonment.

Four of the sons would spend time in prison.

But Oscar himself, although with no prison time, was no stranger to the courts himself.

In 1908, Oscar was fined 10 shillings for throwing a rowdy spectator over the fence while he was umpiring a football game.  In 1909, Oscar was arrested for assaulting William after he arrived home in a foul temper, throwing a plate at his wife before picking up William up the legs and swinging him around the room before hurling him out a glass window. Then in 1911, Oscar was charged with the indecent assault of a 22 year old domestic servant.  Despite testimony from the young woman, her employer and the employer’s son, Oscar was acquitted.

William was brought up on a criminal assault charge in 1911 at Cressy but he was acquitted at trial.  In 1928, he was charged with larceny for stealing car tyres from the Railways using his position as an engine driver.  For this crime he served 18 months at Pentridge and Metropolitan prisons.

Brothers Eric and Roy also served time for various crimes such as receiving, 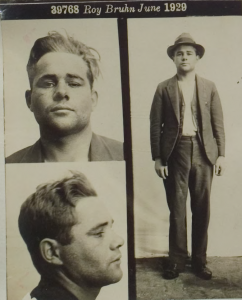 larceny, unlicensed pistol and being a suspected person.

Roy was known for being a standover man and robber.  In 1930, he was shot in the chest because of a dispute over proceeds of a robbery.  In 1931, their father Oscar was shot in the leg with a bullet meant for Roy after a quarrel over money.  In 1937, Roy was implicated in the unsolved murder of John Demsey who was shot and buried in a shallow grave.

But perhaps the most famous brother was Norman Bruhn.  Norman came to the attention of police as a teenager with minor charges such as riding his bike without a light and offensive behaviours.  Norman enlisted in the army with his brothers and many of them were court martialled during their service.  Norman would be incarcerated for being AWOL in France for several months. It was when he returned that Norman spent time in and out of Melbourne prisons for various offences.

Norman became involved with Squizzy Taylor as a standover man with a reputation of a bad temper and a beater of women.  In 1926, when Norman shot a man and it was feared he would die, he took his wife and children and moved to Sydney becoming involved in the razor gang wars as an enforcer.  He would keep company with the likes of George Wallace the “Midnight Raper”, Snowy Cutmore, Sailor the Slasher Saidler and the albino Razor Jack Hayes. 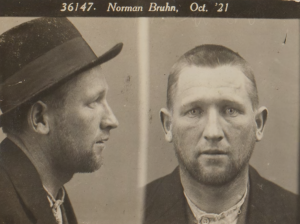 In Sydney, Normans stay would be short lived when on the night of 22 June 1927, he would be shot and fatally wounded in a sly grog shop.  Norman never identified his killers nor did his drinking buddy, horse trainer Robert Miller.  It was believed the shooters were Tom and Siddy Kelly, Frank Green and George Gaffney but they were never identified and charged.

But the crimes continued down the family tree.  Norman’s grandsons Keith Faure and Noel Faure were imprisoned for the murder of Lewis Moran.  Keith served part of his sentence at Geelong Gaol before being moved to Barwon prison.

Locked up with History
Scroll to top Book online now!