While cutting up a goose, Roy Stewart from Warooka, South Australia, butcher found a gold nugget in the giblet bag. He brought dozens of others from the same source hoping to repeat the find but he never again found the goose that laid the golden egg………

Although residents on Lord Howe Island loved a happy life free of taxes and rates, the man of each household was committed by law to set a side a day a week to catch rats.

When a flock of 565 pure white sheep, loaded on to a train at Taihape, New Zealand were brought out at their destination they had all turned black. When the train entered a tunnel thick fumes had brought about the amazing transformation.

While eating a lollipop in the early 1900’s, an Adelaide schoolgirl felt a tickling in her throat, coughed and bought up a small snake. A doctor worked out that while eating watercress several weeks earlier, she had swallowed an egg which had miraculously developed.

Three camels hoofed it from a circus in Melbourne’s south-east, leading police on an early morning camel muster on Thursday. Police were called to a service station on Princes Highway in Narre Warren just before 4am, where the three camels were munching on trees, a police spokeswoman said. Officers kept the camels off the road until circus staff arrived to take them home, about 300 metres up the highway, but not before posing for a “selfie” with the animals. “We’ve had cows and sheep and everything like that, but we’ve never had camels,” constable Steven Pope told radio station 3AW. “It was definitely a first.”

The encounter, on July 6, 2016 left a sizeable gash on the boy’s face, and serves as a reminder to the unpredictable nature of Australia’s wildlife. The eagle tried to snatch a young boy at the bird show.  It is believed the boy and his family were visiting Alice Springs from Albury Wodonga. Victorians Keenan Lucas and Suze Fraser were visiting the Desert Park on the same day and witnessed the ordeal. “We’re at the bird show in the afternoon, having a great time and looking forward to seeing the wedge-tailed eagle come out for the finale,” Mr Lucas said.

“The bird then flew over the crowd and tried to grab on to a young boy’s head. “He screamed, the mother was distraught, and the presenters wrapped up the show very quickly.” Desert Park said the boy was physically OK and his facial wounds were “superficial”.

Christine O’Connell told the Herald Sun it appeared the young boy wasn’t wearing camouflage which could have confused the eagle.

“He he had a green hoodie and he kept pulling the zipper up and down,” Ms O’Connell said.

“The bird seemed agitated at the noise and all he could see would be the boys face.”

Ms Connell posted the picture on her Instagram account and explained how the eagle was meant to fly over to a log for a photo opportunity.

“Instead, he flew straight to the young boy and attacked him,” she said.

“The show was quickly cancelled and the boy was taken to first aid.” 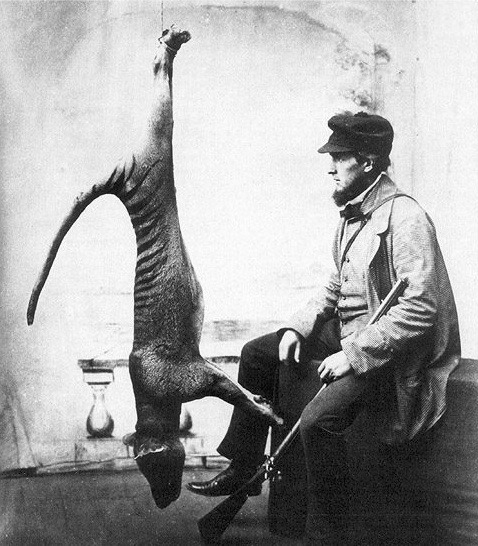 Certainly per European history shows Tasmanian Tigers-Zebra Wolfs (Thylacine) roamed large parts of main land Australia. There is plenty of evidence in fossil remains and Aboriginal cave art. But is it possible they still lived in Victoria as little as 100 years ago. Interesting idea when the last known Thylacine died at the Hobart Zoo on the 7th of September 1936, and Thylacine’s were declared extinct by international standards in 1986. However there are many accounts of wolf-lions-tiger like animals killing live stock through Gippsland, North East and central Victoria and as far as Tantanoola in South Australia. Below is an account of animal killed by a farmer on the 29th June 1916 at Mirboo North, South Gippsland, Victoria.

The sheep-killing animal that was found poisoned in Mr J. Gilfedder’s paddock, close to the Mirboo North township, Victoria recently, does not appear to be either a dingo or a fox. It was two or three times as large as either of those animals. It had the legs, paws and nails of a dog, and the snout and tail of a fox or a dingo. Its mode of killing sheep was to worry their rumps and pull away some of the entrails. Residents who saw-it say that it was a cross between a dingo or a fox and a dog. To ascertain if possible what the animal was, Mr. Gilfedder intends sending the skull, claws and tail to the Director of the Melbourne Zoo, who is recognised as an authority on animals. Some people at Yinnar who had sheep destroyed in the way described poisoned the carcases; but the animal would not take the bait. A successful way to destroy any other of such breed as turn up among sheep is to skin rabbits and put them in a fire, and thus destroy the smell of the hands, and use one as a trail, and cut others, and lay the baits along the trail, without touching them with the hands. This was the method Mr Gilfedder used. Since the death of the animal we have not heard of any sheep being worried around the district. Mr Gilfedder received the following letter from Mr D. Gibson, of the National Bank, Maffra: – “Dear Sir, – I saw in the paper some few days ago that you had poisoned an animal, somewhat like a dingo, but larger, that had been destroying your sheep. I enclose a rough sketch of the Tasmanian zebra wolf, in the hope that it may enable you to identify it with that animal. I and others have seen them up in the mountains; but the fact of their being indigenous to Victoria has never been established by their capture. Probably they are the animal vaguely called the ‘Tantanoola tiger’ and the ‘Morwell lion,’ which has been seen in so many localities. The zebra wolf is a marsupial, coloured from French-grey to russet brown, according to the season, and striped with dark brown to black on back and tail, and less conspicuously on the legs. The coat is short and close, build very strong, pads especially large for its size, powerful hindquarters, progresses either at a trot or by long bounds, height at shoulder 2ft. 6in. to 3ft. I have seen one in captivity which stood on its hind legs over 5ft. high. They are night prowlers, and carry their young in a pouch. They use hollow logs, etc., to camp in, and cover long distances, rarely coming out in the daylight. This is the reason why they have escaped capture so long. The skin or cleaned skeleton would be eagerly purchased by either Melbourne Zoo (D. Le Soeuf), or the National Gallery Museum. Probably they would fetch £20 or so; so they are worth saving.”

Alarm was caused in certain suburbs on the 22nd of June 1928, when a report was circulated that a lion had escaped from the Royal Park Zoo, Melbourne. A statement to that effect was said to have been broadcast by radio, but all the broadcasting stations gave it an emphatic denial. Attendants at the zoo and the proprietors of a circus in the city when communicated with visited the quarters of their lions, and found that none of the animals was missing. Nevertheless people in the areas surrounding the Royal Park Zoo and farther out remained at home for the evening. Tightly closing the doors of their houses, they equipped themselves with shotguns and other arms in the event of a visit from one of the carnivores. So far no lion has been seen.

A number of circus animals have been recaptured after breaking loose in the middle of Broome. Cows, camels, llamas, horses and donkeys escaped from their temporary enclosure on Male Oval this morning after a fence post came loose. It took Circus Royale staff about 10 minutes to round up the animals as onlookers watched in amusement. Circus Royale spokesman Daman Syred says the animals may have been trying to take advantage of Broome’s wet weather. “We had a cow and a few of our horses decided to go for a run through some of the puddles that have formed here on the grounds in Broome, so yeah they had a bit of a run around on the oval,” he said.

Minnie Kinsley, married, was charged at the Fitzroy Court to-day with having her premises in such a state as to be a nuisance.

Charles James Eassie (sanitary inspector) stated that the house rented by Mrs. Kingsley contained eight rooms, a kitchen, and a bathroom, and 19 people were living there. The rent paid by the woman was 11/ a week, and she received 33/ from the occupants weekly.

The house was in a filthy condition, and was covered with vermin of every description. The clothing, bedding and furniture were also infested with vermin. There were too many people in the house.

Witness did not make a thorough examination of the premises, as he found it neeeasnrv to change his clothes as soon as possible and have a bath.

A fine of £3 was imposed, in default one month’s imprisonment.

The recent heat wave in Melbourne is thought to have been responsible for the death of ‘three of the quintuplets born to the lioness Jinja at the Zoo.

The births are an Australian and possibly a world record. Zoo officials are now desperately striving to save the lives of the two surviving cubs.