A man by the name of Alexander Allison, 26 years of age, escaped from this Windermere Hospital for the Insane in Ballarat. Allison was said to be a harmless lunatic. The police were notified of his escape.

A powerful and dangerous looking foreigner, Ernest Victor Kodskon, who escaped from the Beechworth Lunatic Asylum on the 10th of June 1876, reached the dwelling of Mr. Ancrum Heriot, and frightened the inmates, as he had a stout stick in bis hand. He craved and obtained shelter for the night, and ate as much as would suffice for three ordinary men. The next morning the police were sent for, and whilst endeavouring to arrest him he struck violently at constable Egan, and were it not that the force of the blow was lessened by the intervention of Mr. Heriot, the constable would have been killed on the spot. As it was the constable received a severe blow on the head, and lost a great deal of blood. The lunatic was handcuffed and brought to Albury, where, on the recommendation of Dr. Andrews, he was remanded for eight days in gaol for medical treatment. It is astonishing some one was not killed by him and that more precautions are not used at the asylum to prevent the escape of such dangerous lunatics. Constable Egan was hospitalised for a week.

On the 5th of June 1903 a patient by the name of Croker, from the Beechworth Lunatic Asylum made a daring escaped from that institution. Croker a ganger employed on the railway was arrested two months earlier while in Melbourne and charged as being a lunatic. Croker left the grounds of the hospital and walked into Beechworth were he found the train station, here he walked along the tracks until he left town. As the train left Beechworth and before the engine reached full speed, Croker was able to run beside the train and clime aboard were he sat on the buffer of a carriage. Using this method of transport Croker was able to make his way to his where his wife still resided in Alexandra. On arriving he was recognised as an escaped lunatic by the Station Master, who sent a wire to Beechworth to the effect that Croker had turned up. Senior-constable Mooney and Constable Brooker were soon on the spot, but the escapee had left, after being supplied with a change of clothing and £1 by his wife. Croker was known to beat his wife.

Walter Sovereign former warden at Beechworth Lunatic Asylum now a wood cutter. Sovereign was camping not far from Bright, North East Victiria, on the 1st of June 1903 and while boiling a billy in tho darkness after work he was surprised to find a man standing behind him. The man was wearing only a canvas bag and had no shoes. Several questions were put by Sovereign to the man who gave no intelligent continually muttering ‘ Knife” Murder and when asked questions answer simply repeating the words after him . On Sovereign picking up a knife for fear of being attacked the man disappeared in the forest. Police have since scoured the country without finding any trace of the man. He is believed to be one of two escaped lunatics.

On the 5th of May 1899, a female patient from the Ararat Lunatic Asylum escaped by walking out the front door. The young lady managed to walk to Great Western along the train tracks a distance of over 20kms. Once she arrived at her sisters house the police were called for and she was taken back to the Ararat Asylum.

An inquest on the body of Aaron Thomas, an inmate of the Ararat Lunatic Asylum, who was killed by another inmate named Fitzgerald on Sunday, says the Advertiser, was held on Tuesday by the coroner. Fitzgerald is described as an unusually muscular and powerfully-built man, and with the short stout stick which he had torn from the sun-shade to effect his purpose with might have felled a bullock. One of the attendants stated that he saw Fitzgerald a few minutes before the attack, that he looked then to be quite composed, and he (the attendant), having occasion to go to another part of the yard, soon after heard a noise among the patients, and on running to the place he found Thomas lying dead, from the blow which had been inflicted. When Fitzgerald was asked why he had killed the man he spoke of having made the earth and received the Fathers’ love, but nothing intelligible could be got from him. A verdict was returned in accordance with the evidence.
18/04/2016/by Limelight
https://twistedhistory.net.au/wp-content/uploads/2016/04/09ef49703c460db3151b93be510b4f2b.jpg 366 650 Limelight https://twistedhistory.net.au/wp-content/uploads/2018/10/Twisted-Logo-Tranparent-no-shadow.png Limelight2016-04-18 00:00:482016-04-18 00:03:17Murder in the Asylum 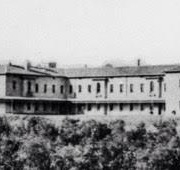 On this day in 1876 a lunatic named Richard Pace managed to effect his escape from the Beechworth Lunatic Asylum. For nearly a month he had been wandering about the bush. At one time he was seen on the Boorhaman run near to where the man Greenwood (former lunatic) hanged himself. From there he seemed to have strayed away to a bend in the Ovens river, and near the Murray, situated some 25 miles from Wangaratta. It was here he was found by Mounted Constable M’Crackon, after a search of two days. He was camped on the bank of the river. He had no covering of any kind. His clothes were in a most dilapidated condition and he was altogether in a very miserable state. He appears to have existed upon shell-fish. Had he not been found at the time he was the probability is that he would have perished from exposure and want of proper nourishment. He was taken back to the Beechworth Lunatic Asylum in charge of Constable M’Cracken.

A miner named Louis Cahoon, residing at Twist’s Creek was attacked by a lunatic who had escape from the Beechworth Asylum. While on his way to a neighbour house on this day in 1877, at 6 pm, was violently attacked in the dark.  As Cahoon was passing through a gate he saw a man hiding behind one of the posts. Not thinking of any harm, he simply said ‘Good night,’ but had scarcely finished his salutation with the man, whom he afterwards recognised as a Chinaman sprang at him, and a knife gleamed in his hand in the starlight as it went straight for his heart. Cahoon, who is a large man, and understands how to protest himself in an ordinary encounter, instinctively threw himself into self defence. But still received a stab in his left arm above the wrist and countering his assailant with the right, under the jaw, sent him to ground. Like lightning the maniac, for such he proved to be was on his feet, and again rushing at Cahoon repeated the stabbing, which he received this time in his left hand, near the thumb, and again countering, felled him, but this time so heavily that he did not arise so quickly. Seeing matter so desperate, Cahoon then armed himself with a stick, and again knocked his would be assassin down as be came on for a third time, but not before Cahoon, in delivering his last blow, received a third stab, this time in the right arm. This seemed to bring the Chinaman to his senses, for on his recovering his feet on this occasion he made off into the darkness, and was not arrested until 21st of April, when Mounted constable Shoebridge traced him to Rocky Point. Luckily for Cahoon, and not a little owing to his determination, the wounds are not serious, as the knife was stopped by the bone, and the others being merely superficial.

Mr. Steve Dewan’s residence, at the rear of the Beechworth Hospital for Insane, narrowly escaped destruction by fire on this day in 1914. By some means unknown the grass in the paddock became ignited, and, fanned by the breeze, drove on to a stack of wood adjoining the house. An alarm was given, and the brigade attached to the Asylum was quickly on the scene with hose and reel. There was a good pressure of water, and the burning stack was quickly extinguished. Only for the promptitude of Asylum Fire Brigade, under the direction of Captain “Bill” M’Cormack, the residence would have been consumed. The only damage was the loss of grass and a few panels of fencing.