On this day in 1912, Dennis Birmingham escaped from the Kew Lunatic Asylum. He was a strongly built man, about 6ft. in height, and 41 years of age. Birmingham was found in St. Kilda.

Michael Farly was committed on the 1st of September 1880, Farly was a farm at Lake Rowan, near Benalla, where he resided on a 100 arc. He escaped from the asylum on the 24th march 1881.

David Chalmens was committed to Ararat Lunatic Asylum on the 14th of July 1869, by his brother Alex Chalmens. Chalmens was a Black Smith for the Port Phillip Mining Company in Clunes. On admission Chalmens was described but the Medical Superintendent Dr William Armstrong as Convalescent. Chalmens escaped on the 24th of March 1883, and was recaptured on the 2nd of April. On the 12th of April 1884 Chalmens was transferred to Yarra Bend Lunatic Asylum.

There was great excitement in Beechworth, North East Victoria on the 22nd March 1868, when the first lunatic escaped from the newly opened Asylum. A young man suffering from idiocy, escaped from the Asylum by climbing over a section of the Ha Ha wall still in construction. The young man walk down the hill into town and visited Fisher’s Hotels were he met Mr. Superintendent Langley were he asked Langley if he could have a nobbler (beer) and a cigar before being returned to the Asylum. Once back the young man again managed to give the warders the slip and got into Beechworth again, but they were soon on his track, and as people are now aware of his roving propensities, he was quickly handed over to Constable Brown, who took him by the hand. Against this the poor young mans protested, saying, ‘Don’t take my hand, and I won’t bolt, ‘your honour.’ The young man was placed in a lockdown ward, so he couldn’t escape again. 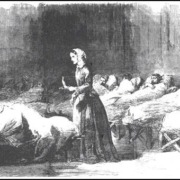 A sad case of the death of a Lunatic at the Geelong gaol on this day in 1854. The body of a deceased lunatic, Ann Connelly, shows how horribly the authorities neglect to provide for the wants of the community. By the evidence there given, we find the unfortunates incarcerated within the gaol walls are treated more like brutes than rational beings, and, to use the words of the gaoler himself, “the present system is quite subversive of prison discipline.” When will the Government listen to the voice of reason? An inquest was held the following day.