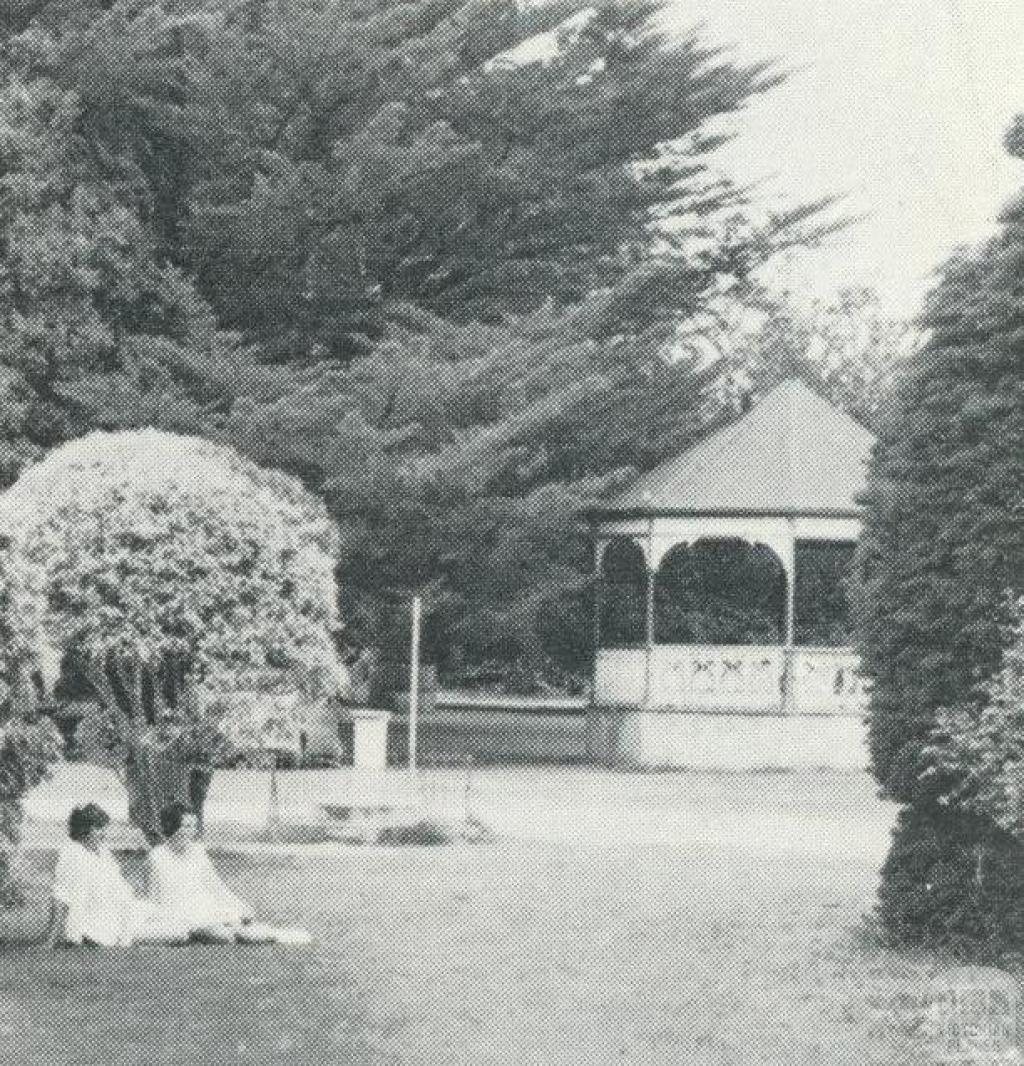 Richard Clarence Skinner, 21, of South Melbourne, was arrested on a charge with having at Bacchus Marsh on November 19, with intent to murder, Arthur Edwards, a farm hand, of Balwyn. He had a severe wound on the chin and was unable to speak. By writing answers to questions by the detectives Edwards stated he had been shot while entering a car on the Ballarat Road at Bacchus Marsh.

Charles O’Brien, a young man, was to-day arrested on a charge of attempting to murder Julia O’Donoghue by cutting her throat on November 12. O’Brien had previously been living with the woman. On the evening of the date mentioned he met her on City-road.South Melbourne, and asked her to renew their former relations. She declined, whereupon he cut her throat. O’Brien was remanded to appear at South Melbourne on Friday next O Brien has admitted his guilt to the police. He stated that he had been impelled to attack the woman through jealousy. He expressed contrition, and was glad the woman was not dead. She had been hiding near Malvern, and had been nearly starved out.

Robert Woodbine Whinfield, 59, of Dorset-road, Croydon, retired auctioneer, was yesterday committed for trial on October 16 at the Supreme Court on a charge of having wounded William Roy Coles; 50, of Bayswater-road, Bayswater, poultry farmer, with intent to murder.

Dr. Ian Thomas Cameron, of Croydon, said he received a telephone call from Whinfield, and went with Constables Grieves and Belbin to Whinfield’s home.

Coles was found under the archway of a hedge. There was a wound on his head, which could have been caused by an axe produced. Whinfleld had said he and Coles had been attacked and robbed. Leslie Bennett, of Dorset-road, Croydon, laborer, said on the night of the wounding he had seen Colas asleep on the couch at Whinfleld’s house. Coles had been annoyed when awakened by Whinfleld. Both men had been drinking. Mr. M, M. Gorman appeared for Whinfield.

Bertha Silk (59), a married woman, was admitted to the Melbourne Hospital late on October 14, with two bullet wounds in the back. She was found lying near the front gate of her home, and later the dead body of Frederick Silk (74), her husband, was discovered by the police in the back yard, with a bullet through the breast, and his clothing smouldering. The attention of neighbours had then been attracted by the sound of shots. They sent for the police, who discovered the tragedy. Silk had a six-chambered revolver clutched in his hand, and four shots had been fired from it. The woman made a statement to the effect that while she was in her bedroom her husband came in, and immediately fired at her. She then ran to the front gate, where she was struck by a second shot. She added that there had been quarrels between herself and her husband in the past. He had objected to her undertaking poultry-rearing, and on the day of the tragedy there had been a dispute about a fowl which was sitting on some eggs. He threw the bird off the nest several times, and on each occasion she put it back. The couple had lived at Bayswater for several years. Silk was a Canadian by birth, and his son is on active service in France.

At the City Police Court to-day Alexander McIvor was charged with having shot at Constable Frederick C Furnell at Gardenvale, on September 9, with intent to commit murder.

Sub-lnspector O’Brien said that on September 9 Constable Furnell was making some inquiries in Gardenvale. He saw a man on the verandah of a house, whose movements seemed suspicious. Furnell spoke to him, and on searching him found a chisel. Furnell them led the man away, when suddenly he fired six shots at the constable from a revolver. Each shot hit Furnell, but none caused serious injury. Furnell swooned, and the man escaped.

The accused, who denied the charge, was remanded till Monday. Bail was refused.

An attempted double murder and suicide occurred at Echuca East on August 29 amongst the residents of the Chinese quarter, which created some sensation. The cause of the affair was a woman. A Chinaman named Georgo Cooey Foo, a well-known dangerous character, who has already served a sentence in Delinquin gaol for stabbing a man, fired at a woman named Sarah Newell and a countryman named William Ah Loon. Cooey Foo has been employed as cook on board the Lady of the Lake steamer. Ah Loon filled a like position on the South Australian steamer Cadell, and when recently at Echuca he was robbed of a £5-note by another Chinaman named James Ah Poo. Ah Loon came to Echuca to be present at the trial of Ah Poo, who, however, had absconded from his bail. Ah Loon then, in the absence of Cooey Foo, took up with the woman Newell. This enraged Cooey Foo, who purchased a revolver — six chambered pin-tire— and he went to Echuca East on August 29, and saw the woman Newell in bed. He fired two shots at her, neither of which took effect. Ah Loon then came to the rescue, and was fired at, but missed. He rushed Cooey Foo, and was shot in the head. The bullet glanced off the cheek-bone and emerged at the neck. Dr. Croker was called in, but unless erysipelas sets in danger is not apprehended. Senior-constable Nedwell arrested Cooey Foo on the capital charge of shooting with intent to murder. Cooey Foo admitted the shooting, and said he was sorry he had been baulked in his design of shooting both. He swallowed a piece of opium, but an emetic caused him to vomit, and he is now out of danger. Cooey Foo had written a letter to a countryman, in Chinese characters, saying he would be dead when the letter reached his friend, and telling the latter to get his watch, clothes, and money.

John Darly was committed on the 3rd of October 1868. Darly managed to escaped on the 18th of November 1868, by walking out the front gate of the Asylum and down the hill into Beechworth, Victoria. Darly was recaptured and brought back to the asylum on the 20th of October only to escape again on the 21st of August 1869. This time however he was only on the large for 24 hour.

Mary Jane Joy was married to a Chinaman and lived in Heffernan Lane.

On the 7th of August, 1886, Mary Jane was seen abusing a 10 month infant in her care. At 11pm that night she had been seen carrying the child out to the outhouse and beat him in a cruel manner. The child screamed as if in pain, and it was then that Mary Jane took the child by the legs and beat its head against the wall twice. After this the child was heard to moan. Her reasoning for the beating was that the child would not drink from the breast. It would come to light that this was a foster child and not her own. The child was removed from her by force where it was found to have a black eye and blood on its face. The infant almost died as was seen to be nearly starving and had been crying for nourishment. The child was eventually placed in the Industrial School and Mary Jane Ah Joy was sentenced to 3 months imprisonment, although she stated she was drunk at the time.