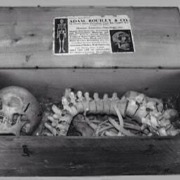 A human skeleton was the strangest Christmas present received in Sydney. An Australian airman serving in the Middle East sent the skeleton complete to a girl living on the North Shore. She recently began medical studies, and in a letter mentioned that a skeleton was unprocurable in Sydney. Back came a letter to say that a “body” had been despatched in three boxes: The girl has never met her airman benefactor, but they became acquainted three years ago through a “letters from home” organisation, of which she is a member. Another unusual gift received was a large potato sack full of manure. It was tied with a huge bow of pink satin ribbon, and tipped with a sprig of holly. Santa Claus delivered this austerity present to a woman garden enthusiast at Vaucluse, with greetings from a country gentleman garden enthusiast more than 200 miles away at Inverell. The recipient was delighted.