Mr. Hughes, 7th Prime Minister of Australia, fell from his horse while riding near Grafton, New South Wales on this day in 1922, and broke his collar-bone. Dr. Earle Page (11th Prime Minister of Australia), who attending Hughes, states that the fracture is not serious.. Mr. Hughes suffered much pain, but bore it stoically, and, after the injury was drawn, sat up in bed, talking animatedly. Mr. Hughes took a week’s rest.

Previously serving in state parliament for seven years, Watson was elected to federal parliament at the inaugural 1901 election, where the state Labour parties received a combined 15.8 percent of the first past the post primary vote against two more dominant parties. The Caucus chose Watson as the inaugural parliamentary leader of the Labour Party on the 8th of May 1901, just in time for the first meeting of parliament. Labour led by Watson increased their vote to 31 percent at the 1903 election and 36.6 percent at the 1906 election. From the first election, Labour held the balance of power, giving support to Protectionist Party legislation in exchange for concessions to enact the Labour Party policy platform. Watson’s term as Prime Minister was brief only four months, between the 27th of April and the 18th of August 1904. He resigned as Labour leader in 1907 and retired from Parliament in 1910. Labour, led by Andrew Fisher would go on to win the 1910 election with 50 percent of the primary vote, ushering in Australia’s first elected majority government, and also the first elected Senate majority. Watson with others were later expelled from the party he helped found over the issue of conscription for World War I.

According to Percival Serle, Watson “left a much greater impression on his time than this would suggest. He came at the right moment for his party, and nothing could have done it more good than the sincerity, courtesy and moderation which he always showed as a leader”. Alfred Deakin wrote of Watson: “The Labour section has much cause for gratitude to Mr Watson, the leader whose tact and judgement have enabled it to achieve many of its Parliamentary successes”.

Rutherglen in North East Victoria played host to the Victorian Governor Lord Brassey, who opened the district’s new Viticulture Collage. The college had been the dream of the. Rutherglen vigneron a since the 1880s. They proposed the building of an institution which could carry out practical experiments for vine culture and wine making, and also train skilled staff for the industry. Rutherglen at the time was the centre of the wine growing industry. There was 350 vigneron’s within a 35 mile radius of the town.

The 17th Prime Minister of Australia, Mr Harold Holt, arrived in Singapore on this day in 1967 with his left foot bandaged following a minor swimming accident. Mr Holt told guests at a Government dinner in his honour that he cut himself on rocks at Portsea, Victoria, during the weekend. His left foot and ankle were heavily bandaged and he had also cut his back, but it was not serious. The incident occurred in rough weather and shallow water when he had moved across near some rocks to warn some Sydney friends of the danger. “I managed to warn them off but instead I hit the the rocks and cut my leg and back”, Mr Holt said. On the 19th of December 1967, after swimming at the same beach Holt would disappear and was officially pronounced dead after drowning at sea.

Joseph Lyons, 10th Prime Minister of Australia was pain fully hurt in a tennis accident at the Lodge, on this day in 1936. When reaching for a high ball, Lyons strained a tendon in his left leg. Next day, however, he was able to hobble to his office with the aid of two sticks. 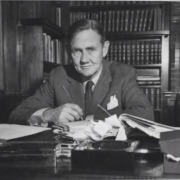 Sir John Grey Gorton was the 19th Prime Minister of Australia, from the 10th of January 1968 till the 10th of March 1971. Concerns about his leadership led to a Party Room vote on this day. Votes for and against him were equally divided but he used his own casting vote as chairman to vote himself out of office. If the majority of his party weren’t behind him, he no longer wanted to be Prime Minister. 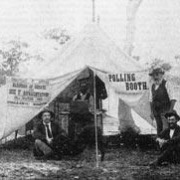 South Australia’s first elections as a self-governing colony was held on the 9th March 1857. There were no political parties or policy platforms; the candidates standing for election submitted letters to newspapers summarising their beliefs and records of public service. 57 candidates stood for the 36 places spread across 17 multi-member seats for the House of Assembly, while 18 members were elected to represent the Colony for the Legislative Council. It was estimated that fewer than a quarter of eligible voters actually took advantage of the opportunity to have their say. Unfamiliar with the system, many voters accidentally submitted informal votes when they crossed out the names of the candidates they did not support. This was largely because, on the morning of the elections, the South Australian Register stated the following: “We need not dwell upon the importance of the duty which every true colonist has to perform today; all we urge upon him is that he should well weigh the merits of the various candidates and then scratch out the bad names with a good bold hand.”