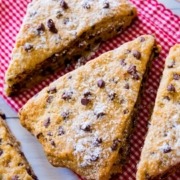 In a large bowl, whisk the flour, sugar, baking powder and salt. With a pastry blender or a large fork, cut in the butter to make coarse crumbs. (Tip: Make sure butter is well chilled to produce the flakiest texture.) Stir in the chocolate chips. Mix in the orange juice to form a dough.

Turn out the dough on a floured surface. Pat or roll into a 9-inch circle about 1/2-inch thick. With a 2 1/2-inch fluted biscuit cutter, cut out 12 scones, pushing the dough scraps together for the last few, if necessary. Transfer the scones to the baking sheet. Bake until golden brown, about 12 minutes. Cool on wire racks. 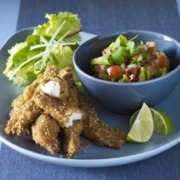 Ingredients for the Dressing:

1. Poach the chicken in the broth for about 6-8 minutes then remove, slice into thin strips and keep warm. Prepare the dressing; reduce the broth to about 4 fl oz. then add the garlic, onion, soy sauce, wine and honey. Bring back to the boil and reduce by half (about 10 minutes) Cool slightly and then whisk in the sesame oil and cilantro. Chill the dressing.

2. Prepare the chicken glaze; heat the lemon rind, juice and honey in a pan until it caramelizes. Remove from the heat and stir in the chicken strips and sesame seeds. 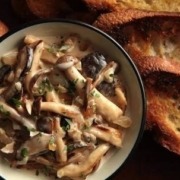 “Thoroughly clean and dry the mushrooms but don’t peel. Slice them into a pan and simmer in butter for 5 minutes. Sprinkle with flour, stir gentle and cook for a further 2 minutes or so. Season, add heated (but not boiled) milk and simmer for a further 3 minutes. Now stir in the cream, immediately reheat well, and serve scattered with croutons of fried bread.”

(According to Dinner at Buckingham Palace, this is recipe which Prince Philip himself came up with, so the directions given could be a verbatim account from the Prince himself.) 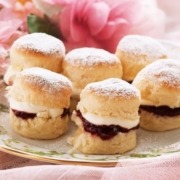 Directions
1. Make a soft dough by mixing the ingredients, including the egg and a little milk if necessary.

2. Place on a lightly floured board and gently roll or pat out the dough to a thickness of about 3/4-in. to 1-in. Using a small plain cutter, cut out the scones and put them in a greased tin, making sure they are well spaced out. Brush them over with a smear of beaten egg and bake in a hot oven (450 F) for about 10 minutes. 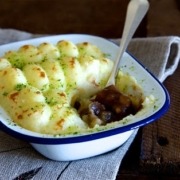 Cottage Pie de Boeuf Braisé – recipe from Buckingham Palace
(This is a form of Shepherd’s Pie and is a wonderful way to use up leftover roast.)

Directions:
1. Puree the potatoes until they are light, white and creamy. Add some milk, butter and seasonings to taste. Heat the drippings in a saucepan, then add the chopped onion, cover and allow to soften slowly. Then add the flour, allowing it to colour, then pour on the gravy. Bring to a boil, season and simmer a few minutes. Remove from the heat and mix in the meat. Add more gravy if necessary to ensure meat is well moistened.

2. Put into a pie dish and lay the potatoes on top, leaving a rough surface. Dot with small knobs of butter and bake quickly in a 400 F oven. When brown and crusty remove. 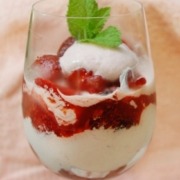 Place ice cream in refrigerator for 30 minutes or until soft enough to smooth easily with the back of a spoon.

In large chilled bowl and using electric mixer, beat whipping cream at low speed for 45 seconds or until slightly thickened. Add sugar and vanilla; increase speed to medium-high and beat for 3 minutes, or until thick.

Tips: If strawberries are large, cut into quarters. Candied violets can be purchases at most upscale grocers or cake decorating shops. 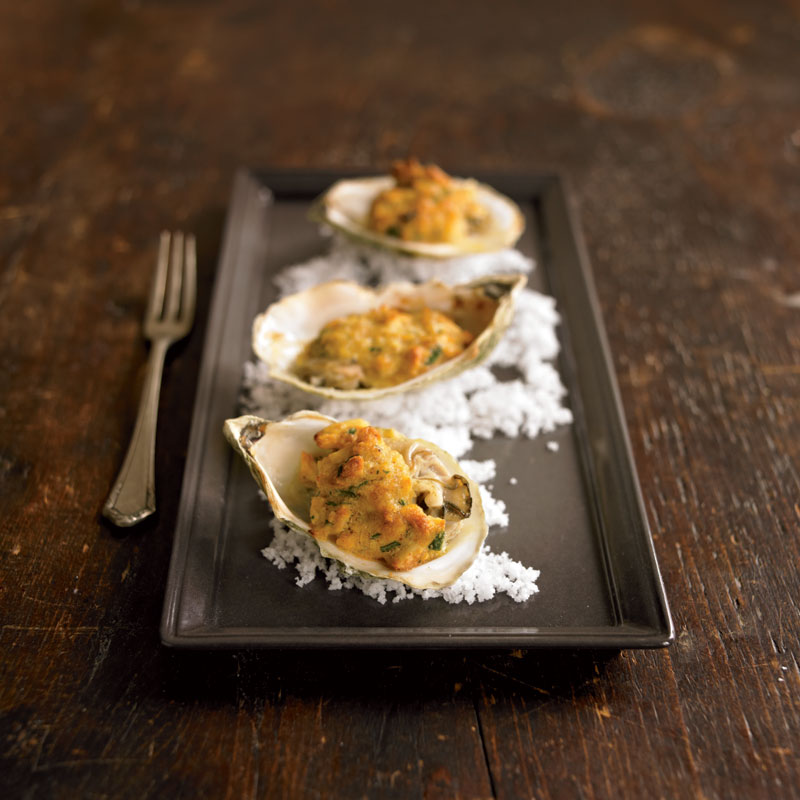 Make a sauce by melting butter, then adding flour and milk, while mixing well. Add egg yolk, seasonings, and oysters.

Arrange buttered scallop shells in a dripping-pan, half fill with mixture, and cover with buttered crumbs.

Bake for twelve to fifteen minutes in a warm oven, 180 degrees. Deep oyster shells may be used in place of scallop shells. 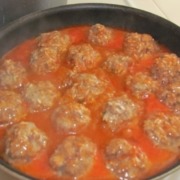 1) Boil tomatoes and onions in water until cooked, put though sieve and celery, beef cubes, sugar, soup, salt and pepper.

3) Bring to boil and add one cup of rice.

5) Simmer until celery is tender. 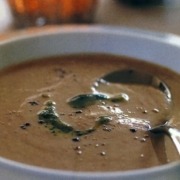 Ingredients:
½lb chestnuts
1oz margarine
Quart vegetable stock
Teaspoon sugar
Chopped onion
Teaspoon lemon juice (equivalent in substitute)
1) Preheat oven to 200°C. If using fresh chestnuts, use a sharp knife to cut a cross into the flat side of the chestnuts. Transfer to a baking tray and bake for about 30 minutes, until chestnuts feel quite soft. Set aside until cool enough to handle (they peel much better when warm), then use a small knife to remove the shells and any furry skins.

2) Heat margarine in a large saucepan. Add the onion and cook over low heat for 5-6 minutes until the onion softens and the mixture just starts to turn golden. Add chestnuts, stock and sugar. Season, then bring to the boil. Reduce heat to low and simmer, partially covered, for 45 minutes.

3) When warm enough, stir in the lemon juice and serve. 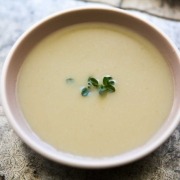 1) Wash and brush the artichokes, putting them into a basin with clean cold water and peel carefully, changing the water as soon as it becomes dirty.

2) Place the artichokes as they are peeled into another basin of clean water, with a little vinegar or lemon juice in it, in order to preserve their colour.

3) Slice the onion thinly, and cut celery into shreds, and cut ham into small pieces.

5) Put lid on the pan and cook for 10mins, shaking the oan occasionally to prevent the contents burning.

6) Add stock, pepper and salt, and let all simmer gently from not to one and a half hours, or until the artichokes are soft.

7) Rub the soup through a hair sieve into a basin, then rinse out the saucepan and return the soup to reheat.

8) Put the flour into a basin, and add the milk gradually to it, mixing until quite smooth. Add this to the soup, and stir over heat until boiling.

9) Continue boiling for a few minutes, and add more seasoning if necessary. If cream and yolks are used for thickening, omit the flour and milk.

10) Beat the yolk of eggs and cream together in a basin, strain them into the soup, stirring all the time, and do not boil the soup again or it will curdle.

In a large bowl, whisk the flour, sugar, baking powder and salt. With a pastry blender or a large fork, cut in the butter to make coarse crumbs. (Tip: Make sure butter is well chilled to produce the flakiest texture.) Stir in the chocolate chips. Mix in the orange juice to form a dough.

Turn out the dough on a floured surface. Pat or roll into a 9-inch circle about 1/2-inch thick. With a 2 1/2-inch fluted biscuit cutter, cut out 12 scones, pushing the dough scraps together for the last few, if necessary. Transfer the scones to the baking sheet. Bake until golden brown, about 12 minutes. Cool on wire racks. 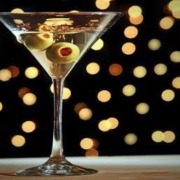 Shaken not stirred…… We all have a preference …. But how do you like you Martini. 10 celebrities share there favourite.
1. James Bond. In Ian Fleming’s Casino Royale, Bond orders the drink like this: “Three measures of Gordon’s, one of vodka, half a measure of Kina Lillet. Shake it very well until it’s ice-cold, then add a large thin slice of lemon peel.” Since the 1953 novel, though, Kina Lillet is no longer available… however, that doesn’t stop Daniel Craig from ordering it that way in the 2006 movie. Today, if you order a Vesper (the offical name of the James Bond martini), Lillet Blanc is typically substituted. Also, the “shaken, not stirred” method will really spark an argument among martini purists – many believe that shaking it bruises the gin and maims the integrity of the cocktail.

2. Winston Churchill. If you order a Churchill Martini, you’ll end up with a glassful of gin. Churchhill famously said the only way to make a martini was with ice-cold gin, and a bow in the direction of France.

3. Ernest Hemingway favored the Montgomery – 15 parts gin to 1 part vermouth. 15:1 is said to be the ratio Field Marshal Bernard Montgomery preferred when going into battle.

4. Lyndon B. Johnson liked the in-and-out martini – a glass filled with vermouth, then dumped out and filled with gin.

5. Alfred Hitchcock and Winston Churchill had the same idea – Hitch said the closest he wanted to get to a bottle of vermouth was looking at it from across the room. That quote is often attributed to Churchill, actually, but the Washington Post says otherwise… Churchill is misquoted all of the time, so I’m inclined to believe them.

6. Clark Gable’s character in the 1958 movie Teacher’s Pet likes to take the bottle of vermouth, tip it upside down so the liquid wets the cork, and then run the damp cork around the lip of the martini glass.

7. FDR absolutely loved martinis and is rumored to have carried a “martini kit” with him wherever he went. His recipe was two parts gin, one part vermouth, some olive brine, a lemon twist and an olive. He insisted on mixing his concoction for Stalin at the Teheran conference. Stalin found it “cold on the stomach” but tasty.

8. Julia Child preferred reverse martinis: a glass full of vermouth on the rocks (she liked Noilly Prat) with a topper of gin. She said she could easily down two of those.

9. Queen Elizabeth II likes Gordon’s gin with three slices of lemon. She may have gotten her taste for gin from her mom – the Queen Mother once requested that two bottles of Dubonnet and gin be packed for an outing, “in case it is needed.” The note she wrote to an aide requesting the booze sold at an auction for $32,000 in July.

10. W.C. Fields reportedly liked to start his day with a couple of double martinis in the morning – one before breakfast and one after.

Richard Nixon liked his martinis, but several sources say he couldn’t handle them very well. He liked the ratio to be about seven parts gin to one part vermouth.