An accident at Wangaratta railway station on this day in 1894, brought to the end one young man’s dreams of making his fortune in the golden west. It was the time of the gold discoveries at Coolgardie WA, and a young man had boarded the train at Wodonga, to join a partner already in Melbourne, before taking a boat to Western Australia. At the Wangaratta station, the young man got off the train and fell into the ash put. As he climbed out of the pit, he was hit by the Beechworth Train. At first, it was thought his name was Martin Walsh from Allens Flat, the name on the suitcase he carried. Further investigations revealed that he was William Clapton Handley, 26 and a carpenter by trade. At the inquest it was found that if the stations had been better light, the accident may not have happened.

Accident was caused on platform No.3, at Flinders-street station on this day in 1917. When the 12.52 pm, train arrived several people were struck and knocked down by an open door of a compartment of the incoming train from Camberwell. The names of the people struck by the door were either bruised or cut are:—Stephen Butler, G. Smith, G. Myers, W. Berudt and G. Haywury.

Whilst cycling down a hill on the Castlemaine Rd, Melbourne a young man named Clifford Jubber fell, and as he was carrying an axe at the time, he could not make any effort to save himself. The right side of his face was badly lacerated, the skin being torn away from the bottom of the eye, and the bone laid bare. He also suffered other painful injuries.

A young man named Samuel Edward Bees, was at the Geelong Court on the double barrelled charge of furious driving and driving without lights on the 3rd March. The evidence of the prosecutor was to the effect that on the evening of the day named defendant drove along Railway Terrace at a furious pace. Darkness had set in and defendant had no lights, so that the danger of an accident was intensified. The constable expressed his surprise at the fact that no serious casualty had been occasioned by the reckless driving of the accused, as a large number of persons were passing along the thoroughfare after the declaration of the poll in connection with the Parliamentary election. Bees was sentenced to 48 hours imprisonment at the Geelong Gaol.

A sad accident happened on this day in 1899, to Mr Harry Smedley. Mr Smedley, who has been working for Mr Gillies, timber contractor, decided to go to Gippsland with the other employees of Mr Gillies. A number of men set out on a large wagon drawn by a team of bullocks and loaded with the various articles necessary for forming a camp. When the party was passing Coldstream Mr Smedley, by some means, fell under one of the wheels which partly passed over him, crushing him badly. He was taken with all speed to Lilydale, where it was found that the case was a serious one. His relatives were hastily summoned, and everything done to alleviate his suffering.

A sad accident happened on this day in 1881, at the A 1 Perthshire Company’s claim, Stawell, Victoria to a tributor named John Bevan. Bevan was working at the face of the reef, 12 feet thick, getting away stone from the headwall. For this purpose two shots were placed, which, were fired simultaneously. Bevan went back to see the effect to soon, and a cake of mullock fell down. He stepped back to get out of the way, tripped over a piece of mullock, and broke his back. Bevan was a young man, and had only been married a week. 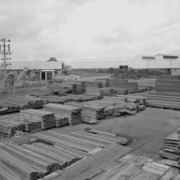 An accident which occurred on this day in 1912, resulted in the death of Robert Palmer, 22 years of age. Palmer worked at a case factory in North Melbourne and while working a circular saw a piece of wood flew from it and struck him on the abdomen. He died at Melbourne Hospital.

Another fragment of the living Kelly Gang history died on this day in 1893. Anton Wick, who achieved lasting fame when Joe Byrne and Dan Kelly used him as a decoy to shoot Aaron Sherritt. Wick was a long time resident of the Woolshed area near Beechworth, who literally stumbled into the Kelly story by accident by wandering past Sherritts cottage at Devil’s Elbow at precisely the wrong moment. Local legend has it that Wick, a widower, was returning home from visiting his married daughter on June 26, 1880 when Joe Byrne and Dan Kelly grabbed him and used him to bring Aaron Sherritt to his door. At the time, Sherritt was being protected by the police and was reluctant to open his door. Byrne and Kelly forced Wick to knock on the door and when asked by Sherritt who was there, was able to say, “It’s your poor neighbour who has lost his way in the dark.” When Sherritt opened the door, he was shot where he stood. He was 66 years of age when he died. 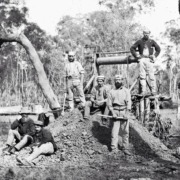 On this day in 1861, Mr Jones a miner on the Wahgunyah, North East Victoria Gold fields, was halfway up a 220 ft mine shaft when he fell. Normally a fall over 100ft would be followed by instantaneously dead, however Jones not only survived, but sustained only minor injuries. It seems the well dug at the bottom of the shaft to act as a collection point for seepage, was in this mine, covered only by light weatherboards instead of slabs, which slowed Jones fall. Incredibly, this was not the first time for Jones. According to reports in the Federal Standard news paper, it was his second accident within a month. 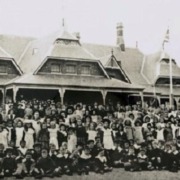 A painful accident happened to Master James Peatling on this day in 1914. Whilst playing at State school in Bendigo, he was accidentally hit on the back of the head with a stone. The head teacher (Mr. E. Morphy) attended the boy, and Mr. J. Pitson drove him home. 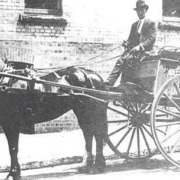 Merbein Lowe a 3 year old girl, the first child born in the Merebein settlement, was knocked down at home by a buggy on this day in 1913. The wheel passed over deceased’s chest severing her head, death was instantaneously. The father and mother were laid up very ill, the former being in the Mildura Hospital. The child was in the care of an aunt. 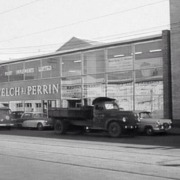 A severe accident, befell a young man named Bert Westmore, 26 years of age, a resident of Malvern. Westmore who worked as a shipping clerk for Welch, Perrin and Co., in South Melbourne on this day in 1909 walking in the yard at the rear of the firm’s premises when a kerosene stove, on which some iron was being heated, exploded. Westmore was severely burnt on the face and arms. He was taken in a St. John ambulance to the Melbourne Hospital.