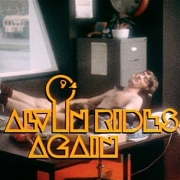 Alvin Rides Again is a 1974 Australia sex-comedy film sequel to Alvin Purple. It was directed by David Bilcock and Robin Copping, who were regular collaborators with Tim Burstall. It was rated M unlike its predecessor which was rated R. Alvin Rides Again still features a lot of full frontal nudity. And like the prequel was written by Alan Hopgood, with a budget of $300,000 Australian dollars.

The premise of the movie is that Alvin Purple (Graeme Blundell) is unable to hold down a job because of his appeal to women. He and his friend Spike Dooley (Alan Finney) help a team of women cricketers win a match by playing in drag, and decide to spend their share of the prize money in a casino. Alvin discovers he is identical in appearance to gangster Balls McGee. When Alvin Purple, is introduced to his doppelganger, Balls McGee, a gangster from America. The gangster wants to watch his favourite TV show – “Skippy, the Bush Kangaroo”, and sings along to the theme music.

Graeme Blundell plays both roles with surprising panache – all the more surprising considering that the screenwriters contrive to off the Balls McGee character almost immediately so that we can be subjected to some tedious switcheroo gags as police come looking for Balls, find Alvin, Alvin goes to get dressed up as Balls, returns. This is funny by default, apparently.

Supposedly there was less nudity this time around, which makes sense considering the intelligence that apparently went into the making of both films. The only reason anyone saw the original film was for the nudity, so why not include less nudity in this installment?

There is also a bigger budget, though unless you pay close attention during the more boring moments, you might miss this. The original movie was a big success in Australia, so of course the sequel has to have something to show for it…

The answer is, a pointless car chase at the end of the movie, featuring a car with guns mounted to the side. I don’t know if the driver was ever introduced, or if reasons were ever given for why he wants to kill Alvin, but no matter. The chase scene is as tedious as it is pointless, and it features two explosions – so THAT’s where the money went! – and ends in the surprisingly violent death of an innocent bystander. Yes, this is the sort of comedy where men impersonate women without shaving moustaches and sideburns and yet fool everybody, people run in and out of rooms chasing each other in fast forward while zany music plays, dwarven actors have their voices dubbed to make them sound as high pitched as possible, and forklift operators are violently machine-gunned to death. One of these things is not like the other.

Some comedies are so witless that they approach surrealism. “Alvin Rides Again” doesn’t quite reach that level, for while the violence is bizarre and completely out of place, its presence as an afterthought simply suggests the writers had no idea what to do with the budget they had or the movie they had to make. It is also portrayed so unrealistically that you could miss it pretty easily. There is, after all, perhaps the least painful meat cleaver to the face shot I have ever seen in a movie.

Tim Burstall, Alan Hopgood and Graeme Blundell weren’t particularly interested in making a sequel to Alvin Purple but the film was so successful, Hexagon Productions wanted a follow up. Blundell wanted to avoid being typecast so a story was created which gave him a chance to play a double role. Burstall, who claims he wrote most of the script with Al Finney, says that: When it came to the crunch, Blundell failed to differentiate between paying Balls and playing Alvin pretending to be Balls. In my view, the film fails for precisely that reason, i.e. Alvin is lost. 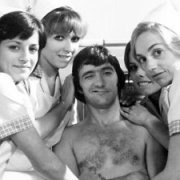