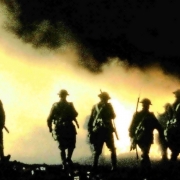 Anzacs was a 5-part Australian television miniseries set in World War I. The series follows the lives of a group of young Australian men who enlist in the 8th Battalion of the First Australia Imperial Force in 1914.

The series follows in the wake of Australian New Wave war films such as Breaker Morant (1980), Gallipoli (1981), and precedes The Lighthorseman (1987).

Recurring themes of these films include the Australian identity, such as mateship and larrikinism, the loss of innocence in war, and also the continued coming of age of the Australian nation and its soldiers.

The series starts in Western District of Victoria in 1914. Martin Barrington (Andrew Clarke), the son of a wealthy British-born land-owner Sir Rupert Barrington (Vincent Ball) and his wife Lady Thea Barrington (Ilona Rodgers), returns home early from university studies with plans to move north to the family’s Queensland property in a bid to up the quality of their livestock.

His best friend, stockman Dick Baker (Mark Hembrow), initially agrees to move with him, but later wants to enlist to fight in the Great War which has just begun in Europe, and Martin agrees to follow (after turning down a commission as 2nd lieutenant in his father’s old British rifle regiment), joined by Dick’s sister (and Martin’s childhood sweetheart) Kate, who will become an army nurse.

The men train in Australia and Egypt, before take part in the Allied invasion of Turkey at Gallipoli on the 25th of April. The platoon experience the harsh and bloody campaign and the appalling conditions, suffering heavy casualties. Both of the Johansen brothers are killed on the first day and Martin is badly wounded that night.

Pat Cleary soon proves himself an expert ‘scrounger’ of luxury goods, and he and Madame, a local cafe-owner, run a thriving business built on, amongst other things, stolen liquor originally bound for General Haig.

In London, Australian journalist Keith Murdoch, who had been at Gallipoli, meets with British War Secretary Lloyd George who has a dislike of British Army commander Douglas Haig.

The platoon are sent into a ‘Nursery’ sector of the Western Front to break them into trench warfare. During a raid on the German lines, Morrissey is killed and combat-fatigued Sgt McArthur freezes in terror and Martin leads the mission, even though McArthur is given credit for it.

In July, the platoon take part in the bloody Somme Campaign, attacking the French village of Pozières. The attack breaks down in confusion and Armstrong is hesitant and in-decisive, forcing Martin and Flanagan to assume leadership roles.

Behind the lines, Haig coldly informs Murdoch that the Germans have concentrated all of their reserve artillery on the Pozières sector in an effort to contain the Australians, who are the only ones to reach all of their objectives.

The platoon suffers heavy losses, mostly from shelling. Private Upton is killed trying to warn the platoons relief from a trench which enemy artillery had targeted, and Roly Collins nearly goes insane from shell-shock.

After a long battle, the dazed and traumatized survivors stagger back to the rear. Later that year, the platoon are sent back into the Somme sector, now bogged down in the cold and mud of winter.

Back in Australia, the debate over whether to introduce conscription causes bitter political and social divisions which will resonate for decades to come.

Reverend Lonsdale draws the ire of his parish for daring to question the conscription proposal and the conduct of the war. Pompous Australian politician, “Would to God” Cyril Earnshaw pressures his timid librarian son Max into enlisting.

In one episode, an Australian soldier remarks how much the French countryside reminds him of Daylesford back home in Victoria, Australia. This was an in-joke as some scenes were filmed near Daylesford, including the German counter-attack scene in episode 4.

The surviving veterans reunite in their local town back in Australia for the unveiling of the new war memorial to the fallen. Kate and Flanagan are now a couple and are business partners with the enterprising Cleary providing the capital.

Roly Collins is set to become a journalist working for Sir Keith Murdoch. Harris, Kaiser and Bluey also attend, as does a fragile Armstrong who now resides in a rest home and Max Earnshaw, now permanently blind and in charge of the State Braille Library, while his politician father, “Would to God” Earnshaw, once so in favour of the war was now annoyed at having to attend memorials in his electorate since it did little to further his political career.

At the memorial Reverend Lonsdale reads a moving tribute to the Anzacs, Roly reads the fourth stanza of the Ode of Remembrance, and then Martin’s mother and Dick’s mother lay wreaths at the foot of the memorial. As a bugler plays, the scene dissolves to the green fields of the Somme in the present day.

The series was well noted for its humour and historical accuracy, and was a huge rating success for the Nine Network when it aired.  According to the review by James Anthony: “The battle scenes are terrific and the muddy trenches of the Western Front look acceptably cold and horrible.

Some of the acting goes a bit astray and there is sometimes a bit too much play on larrikinism and ockerness, but overall it sits well as a quality drama with good characters.”

Interesting note many of the extras playing the roles of Allied, American, and German soldiers were serving members of the Australian Army. This was done to keep costs down so that actors did not have to learn how to act as soldiers or to have to teach them how to use the weapons.