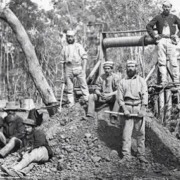 Gold was first officially discovered in Australia on 12 February 1851, not far from Bathurst, New South Wales. Edward Hammond Hargraves had carefully studied the geology of the area and, convinced that it was similar to that of the California goldfields, from where he had just returned, went prospecting. He enlisted the assistance of John Lister, a man who had already found gold in the region. Of particular note was the use of the cradle, or rocker, a technology which Hargraves had brought back from California. This device allowed prospectors to search a greater volume of soil at any given time. Lister, accompanied by William Tom and his brother James, found four ounces of gold using the cradle. They led Hargraves to the location at Summerhill Creek, at a site which Hargraves named “Ophir” after the Biblical city of gold. After reporting his discovery, he was appointed a ‘Commissioner of Land’, receiving a reward of £10,000 plus a life pension. The New South Wales government made the official announcement of the discovery of gold in May 1851. Lister and the Tom brothers, however, were not given any credit or reward for their part in the discovery. 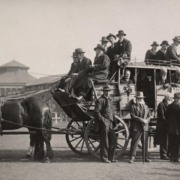 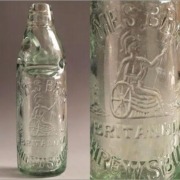 Willie Hall, aged 4 years and 9 months, son of Mr. Walter Hall, of Hill End, met with a serious accident at his parents’ residence on Christmas Day. He dropped a bottle of lemonade which he was carrying, with the result that the bottle burst, and a piece of glass flew up and penetrated his right eye. The little boy was brought to Bathurst, where it was found that the eye was so injured that it had to be removed.