An elderly woman named Blanda Gunn was charged at the Castlemaine Sessions with the manslaughter of Kathleen Farrell on March 4. Accused pleaded not guilty. The case arose out of the alleged unskilful treatment of tho deceased, who was suffering from cancer. The accused, who is known as Madame Gunn, treated Farrell, who was in a highly cancerous condition, and had, it was alleged, placed an arsenic plaster on her breast, which it was claimed induced pleurisy, the direct cause of death. For the defence, it was contended that death was due to cancer. The jury failed to agree, and the accused is to appear at the next Sessions.

The dead body of an elderly Chinese, named Ah Cheong, was found in an abandoned shaft at the Eureka mine, in the Castlemaine district, on this day in 1907. The circumstances clearly indicated that he had been murdered. After the police had raised the body to the surface they examined more closely the indications which led them to suspect that a murder had been committed. Cheong’s head had been battered out of shape by a succession of blows, apparently inflicted with a blunt and heavy, instrument. There were marks of a severe struggle about 40 yards from the mouth of the shaft, and it was apparent that the Chinese, who was 60 years old, had, in spite of his age, made a desperate fight with his assailant. Patches of blood and other marks extended from this spot to the shaft, showing that the body had been dragged along by the murderer. The shaft, which is 50ft. deep, contained 12ft. of water, and is situated in a lonely spot, there being no dwellings in the immediate neighbourhood. Heaps of loose gravel around the mouth of the shaft were marked with blood-stains, and an attempt had been made by the murderer to remove these marks with a shovel. A quantity of debris had been thrown into the shaft, evidently in order to conceal the body more effectually.

Enquiries into the murder of Wong Ah Cheong, at Eureka, show that on the 9th of February 1907 the deceased, accompanied by Ah You, who is under arrest on a charge of murder, and a third Chinese, Ah Tong, left his hut in Spring Gully for Castlemaine. According to Tong, the three proceeded together as far as Eureka. Ah You and deceased engaged in recriminations to such an extent that Tong went in front of the party. Subsequently Tong met Ah You in Castlemaine, and asked him where deceased was. Ah You replied, “I do not know; he turned back when we got as far as Eureka.”

James Fawkes was charged with wounding with intent to murder his uncle John Rogers at Campbell’s Creek, Castlemaine, on February 7. The prisoner went to his uncle’s house on February 7 and deliberately shot him in the head, and afterwards also wounded James Hocking when he tried to detain him. The evidence of Drs. Reid and Henderson went to show that the prisoner was not of sound mind. When asked to plead he said he was guilty, but the judge refused to take the plea, suspecting insanity, and caused the assignment of counsel (Dr. Quick) to conduct his defence. The judge summed up at length, and was evidently deeply moved. In the course of his remarks he said that counsel should have been previously assigned to the prisoner, and that it was not fair to leave it to the judge to find out the state of a prisoner’s mind. The gaol officer evidently thought that he was insane, yet the authorities had made no further investigation in the matter, and had he (the judge) not noticed that there was something wrong with the man his fate would have been sealed at the present moment. The jury found a verdict of guilty, adding that the prisoner was insane at the time of the committal of the offence. His Honour ordered his imprisonment during the pleasure of the Governor.

On the night of the 19th January a man named Thomas Reece was murdered by one John Burns, at Tarrangower, near Castlemaine; the latter succeeded in making his escape, is still at large, and the police authorities have now offered a reward of £50 for his apprehension.

In order to more effectively prevent reformatory prisoners from escaping from gaol, Mr. Connor, the Inspector General of Penal Establishments in Victoria, will make certain recommendations as the result of his inquiries into the escape of three prisoners from the Castlemaine gaol on this night in 1909. One of these men, Harrison Goodhind who escaped from Castlemaine Gaol, subsequently surrendered himself to the police. He was sent back to Castlemaine, where he was interviewed by the Inspector General. It is understood that it is improbable that any officers of the gaol will be censured ever the matter.

On the 24th of December 1904 a miner witnessed a curious encounter at Lady Gully, Castlemaine, Victoria, between a 1.2m brown snake and a couple of large lizards. The snake was trying to kill a lizard when a second lizard appeared and joined in the attack on the snake. The miner went to cut a sapling to kill the snake in order to save the lizards. On his return, he saw the three combatants locked together, fall down the North Perseverance mineshaft. Two miners working at the bottom of the 30m shaft got a shock when the snake and two lizards fell between them. They promptly killed all three with their picks. 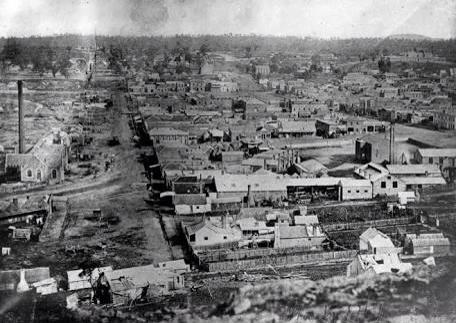 The inquiry into the death of Dagmar Louisa Scott, who was found dead at Spring Gully on December 14, was resumed at Castlemaine by the coroner (Mr. S. J. Goldsmith) on Monday. The husband, Robert Scott, was present in custody on a charge of murder. The principal witness was Thomas Kaiser, brother of Mrs. Scott, Who deposed to being at Scott’s house on June 22, when a quarrel arose over Scott having gone secretly to Melbourne. He heard Mrs. Scott say, “You have been to Melbourne to see that other woman of yours, Mrs. Saunders.” Scott replied, “Whether I have been to Melbourne to see that other woman or not, if I hear any more of it I will blow your brains out, and Saunders’s, too.” Mrs. Scott then rushed out of the house, but came back later on, and she and Scott had a quarrel outside, and she fainted. Scott carried her into the house, and she soon revived, and the quarrelling recommenced. Witness was going away, but deceased implored him not to, saying, “As sure as you go he will murder me.” Scott said, “It is all right, Tom, you can go; I will not harm her. On the day of the tragedy he went to Scott’s house and saw the body. Scott said, “This is a fine thing, isn’t” it?” Witness replied, “Yes. You are at the bottom of the lot. You have well murdered her. You threatened her before in front of me. and you have done it now.” Scott made no reply. Charles Saunders, a miner employed under Scott at the Spring Gully dredge, gave evidence that immoral relations had existed between Scott and his (witness’s) wife, in consequence of which Mrs. Saunders left home early last March, and had been in Melbourne ever since. Witness had been on friendly, terms with Scott, and continued to work under him. Alice James, housekeeper for Saunders, gave evidence as to seeing: Scott and his wife going towards the tailings heap, and hearing the shot fired. Mrs. Scott appeared unwilling to go. and just as they reached the high bank Scott gave his wife a push, and they both disappeared behind the high hank, and the shot went off. The coroner found that death was due to a shot fired by Robert Scott, who was committed for trial on a charge of murder. 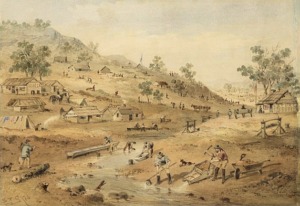 George Dyer, self-accused, after the lapse of 13 years of a murder committed in 1857 on George Wilson, was tried at the Castlemaine Circuit on Tuesday, on the capital charge. Although the prisoner retracted his confession made in England, shortly after he had made it, there can be little doubt of the truth of the main portion of it but one part of it left it doubtful whether he had killed Wilson in self-defence or not. Taking his own statement and the other evidence, the facts were that in November 1857, Dyer and Wilson were mates at the Mia-Mia diggings. Wilson was suddenly missed, and soon afterwards prisoner left the place, taking with him the tent. He then went to live at a place now called Vaughan, about seven or eight miles from Newstead. To a person named Sinclair there he said he had just come from the Mia-mia and besides his own statement, this was the only evidence that Wilson was ever at Mia-mia, one of the witnesses who proved this at the Police Court and who was to prove it on Tuesday, had disappeared since the Police Court investigation, and could not be found. A few days after Dyer left the Mia-mia a body was found in a waterhole about 60 yards from where it was supposed his tent was pitched. It was not then identified. But an examination of it showed that the jaw had been fractured as if by a spade or axe handle, and in the back part of the skull were several large holes, as if caused by a pick. It was these, and not the fracture of the jaw, that caused death. The inference, therefore, was that Wilson had been first stunned by the blow on the jaw, and then killed by such an instrument as a pick. The body, it was contended, need not be identified as Wilson’s for the confession and the other evidence were sufficient to justify an inference that it was. The prisoner defended himself, and asserted that he must have been labouring under an hallucination when he made the confession; that he never was at Mia-Mia. He had a recollection of being partner with George Wilson for a short time, but he denied having quarrelled with him. The judge left it to the jury whether the prisoner, even if he committed the act, was guilty of murder or manslaughter, and the jury after deliberating an hour and a half, found him “Guilty” of the lesser offence. He was sentenced to eight years hard labour.