Judge Moule, in General Sessions yesterday, directed the acquittal of Horatio Wainwright, truck-driver, of Fell crescent, East Malvern, who was charged with the manslaughter of Edward Francis Tierney, aged 30 years, telephone linesman, of Deakin street, Hampton. Wainwright was discharged. Tierney and David Mollison, another postal employee, were wheeling their bicycles along the steel tracks in Dynon road, Footscray, about 2 a.m. on June 23, when they were struck by a car, and Tierney died In hospital.

Charged with the manslaughter of John Brown, a labourer of Footscray, at Benalla on June 17 Ernest Walker of Footscray, a labourer, aged 34 years appeared before Mr Justice Wasley in the Criminal Court. Mr Book, Crown prosecutor, appeared for the Crown, and Walker was defended by Mr Winchester. The Crown case was that on June 17, Brown and Walker were in the Benalla district looking for work. They had camped in a shed on the racecourse and had been drinking. On the road near the racecourse a quarrel arose between Brown and Walker over the purchase of a loaf of bread. Brown kicked at Walker and Walker kicked Brown in the chest. Walker followed the kick with two blows on the head. Brown fell to the ground, and Hector William McLennan and Harold Francis Perins, who had been rabbit trapping in the district sent for the police. Plain-clothes Constable Loh went to the spot and found that Brown was dead. The Crown suggested that the two blows on the held had killed him. Loh and Constable O’Farrell went to the shed where they saw Walker asleep on some hay. Asked if he had taken part in a fight Walker said “No the other man fought me.” When he was taken back to the body Walker said “I did not mean to kill him, he was my best friend”. Walker on oath said:- “We were good friends but on this day we had been drinking. I gave him some money to buy bread, and later I asked him if he had bought it. He said that he had not and a row started. He made a kick at me and I struck him once. I did not kick him”. Walker was sentenced to 6 months prison at Pentridge. 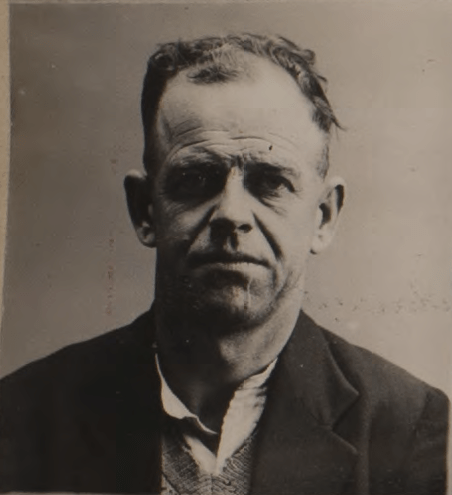 “I am not guilty! I am Innocent! God knows I am not guilty!” With those words Clifford Earl Smiles, aged 31 years, motor mechanic, of Warleigh road, West Footscray, burst into sobs in the dock of the Criminal Court on September 18 after a jury had found him guilty of the manslaughter of his wife and child. The jury had deliberated for a little more than three and three-quarter hours, having left the court at 5.15 p.m. Smiles was remanded for sentence.

Smiles was charged with having on June 14 murdered his wife, Edna May Smiles, aged 24 years, and his daughter, Norma Elizabeth Smiles, aged four months. The bodies of Mrs. Smiles and her daughter were found in the gas-fllled kitchen of their home at Warleigh road, Footscray, on the morning of June 14. The Crown alleged that Smiles had suffocated his wife and had then placed the dead body, with the baby, which was then alive, in the kitchen, turning on the gas at the stove to make it appear as if Mrs. Smiles had committed suicide and gassed the baby.

Charges against Thomas Gerald Buckley, 40, of Droop st, Footscray, and Clarence Gordon McGlynn, 38, of Moore st, Footscray, of having murdered Malcolm Appleby at Footscray on November 27, were struck out in the City Court yesterday. An open finding was recorded at the inquest on Monday.

At an inquest into the circumstances surrounding the death of William Henry Rolley, who was shot in Irvine street, Footscray (V.), on November 17, a few minutes before midnight, a verdict of wilful murder against an unknown man was recorded. Dennis John Bourke, a labourer, of Albert street, Footscray, said that he met Rolley in Nicholson street, and they walked about Nicholson and Irvine streets until after 11 o’clock. Each had bottles containing beer in his pockets. Rolley entered a lane near Irvine street, and was joined by a strange man. The stranger said, “I could do a drink,” and the three men drank together. Rolley suggested obtaining pies for supper, and they walked to a shop in Nicholson street. The third man placed a bottle of beer on the supper table, but removed it at the request of the shop keeper. Outside the shop Rolley said to the stranger. “Are you going to open that beer and he replied, No, I will take if home.” Rolley said. “Better open it. We have treated you well.” The beer was then opened and handed to witness, and as they were about to drink the stranger said “There are two constables.” The three men walked towards Irvine street, and as they turned the corner the unknown man began to hurry towards the railway station. Rolley called out, “Wait a minute.” and chased him. The stranger turned and fired two shots. Rolley fell on his face, with a wound in his forehead and another in his right shoulder.

An inmate of the Lunatic Asylum at Sunbury, names John O’Brien made his escape on the 26th of September 1896, got on the railway line and walked towards Footscray. He was followed by a warder on horseback, but through the horse, breaking, down a ceed any further. A telephone message was therefore sent to the Footscray police and Senior-Constable McGrath and Constable Gierck proceeded to Victoria street, near where they met the escapee. He was detained here for the night, and sent back next morning in charge of warder. It appears that O’Brien, who is a powerful man, has been an inmate of the asylum for 9 years, and has often shown signs of violence, but although he endeavoured to avoid arrest, he submitted quietly when he saw no chance of escape.

An unfortunate woman, Eliza Brown, who was discovered at Footscray in a destitute condition, was brought up on the 17th of September 1859, at the Williamstown Police Court, and found to be a lunatic, escaped from the Yarra Bend Lunatic
Asylum.