Elizabeth Lowe was buried on the side of the creek, near to where she was murdered. A white picket fence was built around her burial site, which remained until a bush fire in the 1920s. Today nothing is left to suggest that a community once stood here or even a public house where weary travellers would stop. The man Owen McQueeny, charged on suspicion as the murderer of Elizabeth Lowe, at the Green Tent, was examined at the Police-office this morning. The prisoner is rather a forbidding looking man, an Irishman apparently, from his dialect, and is of dark complexion, with dark hair, and a defect in his right eye similar to what among horses is denominated a “wall-eye.” Among the property missing from deceased’s tent, the purse, or portemonnaic, has been fully identified, also the bowie-knife and small flute. The wedding-ring produced is sworn to by her brother as being hers, to the best of his belief, being remarkable for the depth of impression of the Goldsmith’s hall stamp on the inner side. The keeper of the wedding-ring has not yet been found. The two principal links yet wanting to connect the prisoner more fully with the terrible crime are the time when Mrs. Lowe was last seen alive on Friday, 9th July, and the time the prisoner was last seen about her tent. During the examination the prisoner tried frequently to joke on the evidence, and repeatedly laughed at the questions he put; but there can be little doubt, from his efforts, that these were forced. The Inspector of Police applied for a remand for seven days, to enable him to produce the doctor who had attended the inquest, and to collect further evidence. Remand granted. Owen McQueeney was found guilty of the wilful murder of Elizabeth Lowe and was hanged at the Old Geelong Gaol on the 20th October, 1858. 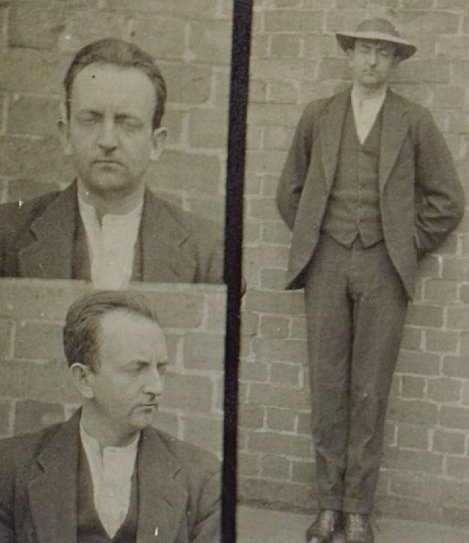 Mr. W. A. Callaway, acting Inspector of Penal Departments, was in Geelong on this day in 1910, and paid an official visit to the Geelong gaol. He went through theinstitution in company with the governor, Mr. G. W. Furnell, and found everything satisfactory.

A prisoner named Frank Tilker, was sentenced to six months’ imprisonment for larceny at Willaura, was brought from the Ballarat Gaol on this day in 1910 by Constable Hooley to serve his sentence in the Geelong Gaol.

The new Governor of the Geelong Gaol, Sir. T. Crotty, arrived on this day in 1924, to comment his duties. Mr. Crotty takes the place of Mr George Taylor who recently retired from the service, and who has been over 35 years in the Penal Department. Crotty had previously been at Pentridge, where he was head warden.

A postmortem examination was concluded at the Geelong gaol upon the body of a prisoner named Alexander Dickson, who was sentenced to a months imprisonment about ten days ago by the Camperdown magistrates for insulting behaviour. Death was shown to be due to a compression caused by a tumour on the brain and the coroner (Mr Read Murphy) returned a verdict accordingly.