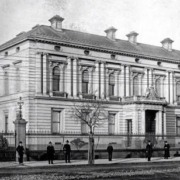 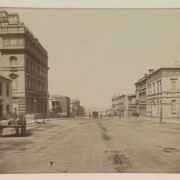 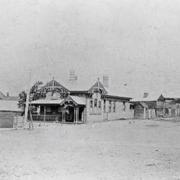 Margaret Thomas, a domestic servant, aged 22 years, was committed for trial at the Gordon Police Court on a charge of murdering her illegitimate child at Egerton on December 18. Evidence was given by Thomas Stevens as to the finding of the body of a child in an outhouse at the Rose Hotel on the morning of December 19, and Mr. Gowan, M.B., who made the post mortem examination, stated that death was duo to suffocation. The accused reserved her defence, and was committed for trial. Bail was allowed in two sureties of £200 each.

A tragic occurrences are reported from Mortlake, one of which, the murder of an infant child, has resulted in the arrest of a girl named Bumas, who was employed at Mr Dennis’ station, ” Eeyeuk.” The child was found with its throat cut, and the young woman has confessed that she did it. The police have obtained possession of the instrument with which -the infanticide was committed, and the girl is to he brought down to the Geelong gaol hospital as soon as she is fit to travel.

The detectives are continuing their search at the house and ground in Malcolm road, Mordialloc, lately occupied by Mrs. Isabella Newman. Mrs, Newman left in her bedroom whither she had gone to change her clothes before going to the lockup, two notes. One of them was as follows : — “My dear , husband and children, forgive me for what I have done. I am innocent of the offence charged against me. God forgive me and help me in my hour of trial. Your loving wife and mother.” On the back of the note there was a second message which was apparently intended for the detectives which read: “A last word, my husband and children don’t know ” anything about it. He thinks I am getting £10 per week to keep the babies. That is all I know, so help me God.” Mrs. Newman was well-known in athletic circles some years ago as Madame Isa Bell. In March 1908, she issued a challenge to race any woman in Australia for the championship. Miss Ivy Evans, of Bendigo, responded to the challenge, and succeeded in defeating her.

On December 7, at Yanac North, near Nhill, Annie Sophia Thiele, 26, wife of Edward Reinhold Thiele, locked herself in a room with her two children. Subsequently the door was burst open, and it was discovered that the children—a boy aged one year and nine months and an infant aged five months — had been killed with a knife. Mrs Thiele was lying wounded, and was found to be past help.

It was surmised that she took the lives of her two children and her own while temporarily insane. Mrs Thiele had been packing up, preparatory to journeying to Forrest, on a visit to friends. She had not been in good health recently.

An inquest was opened.

The Governor-in-Council, acting on the advice of the Cabinet, commuted the death sentence passed upon the young woman Mary Fitzgerald, by Mr. Justice Hood, to imprisonment for three years with hard labor. The prisoner was found guilty at the Benalla sessions of the murder of her newly-born child at Wangaratta by drowning it in a waterhole.

Catherine M’Donald and John M’Dougall were brought up on remand at the Murtoa Police Court on Thursday on a charge of the wilful murder of their infant at Lubeck early last month. The Bench considered that a prima facie case had been made out, and committed the prisoners to take their trial at the Supreme Court at Horsham on October 8.

The Police Court building in Geelong was well crowded with an eager throng of people eager hear the occasion of the initial proceedings taken by the police against a young woman named Lizzie Splatt, who was charged with having murdered her illegitimate male child. It was stated that in September the dead body of a male child was found floating in a waterhole right opposite the house where the prisoner resided at East Geelong. The result of the police inquiries was that it had been ascertained that Miss Splatt, who now said that she had been married to a farm laborer named Peter Jennings a week since, had about eight mouths since gone to reside at Jennings’ house. According to the information of residents of East Geelong. Miss Splatt was two months ago to visit the Lying-in-Hospital in Melbourne, Miss Splatt returned to her house at East Geelong one night about nine o’clock with out any child, but she carried to the house a child’s cape and hat. She told the neighbours that she had been confined in the lying-in-hospital of a child, which died a few hours after its birth, but the police had evidence to show that Miss Splatt had a child In her arms when she arrived in Geelong. The authorities at the Lying-in- Hospital had informed the police that the young woman was confined with a male child in the institution. One of the women at the hospital told Constable Quilty that she saw the prisoner safely on board the steamer going to Geelong, and that she was then carrying a baby in her arms. A blanket and a flannel found on the body of the infant on the 10th September had been shown to the attendants at the hospital in Melbourne, and they identified the clothing as that given to a young woman who was going to Geelong with a child. The prisoner had admitted to the constable that she had been confined of a child, but said that it was a female. The prisoner, it would be proved, had been twice seen to walk round the water hole where the body of the child was discovered,and each time she had remained about the locality for about ten minutes. Mr Price said that the young woman had admitted that she had given birth to a child, but she had instructed him that it died before she left the hospital. He did not object to the remand, but asked that the prisoner should be admitted to bail. The young woman was married, and had to look after several children. The bench declined to allow the prisoner out on bail, and remanded the young woman to appear at the court, 4th October, to answer the charge of having murdered a male child.