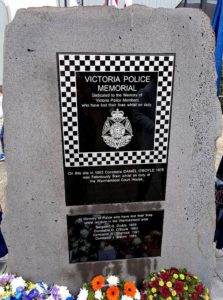 Shortly after 3 p.m. on Sunday, 9th January 1921, the motor launch “Nestor” sank in the Hopkins River, near Warrnambool

The boat had set out with 80 passengers aboard heading 5 kilometers upstream to Jubilee Park.  The Nestor had only gone about 1700 feet (518 meters) when the first alarm was raised that she was taking on water.  The owner of the boat, Edward Geary made attempts to beach the boat and had sent two boys ashore to fasten it off but it unfortunately did not hold. Ten people would ultimately drown.  Geary would be charged with manslaughter but the charges would later be dropped.

Constable William Sharrock was on duty on board the Nestor to keep order.  However he died a hero saving three people, including his sister in law Eleanor and her child, before succumbing to the water.  He was later found to have died by strangulation caused by the neck on his coat being too tight.  His body was recovered the next day.

Constable William Sharrock had joined the police force in 1901, having been a labourer before he joined.  He had spent his 20 years in the force mostly in South Melbourne and then Warrnambool.  Sharrock was a well respected and liked officer.  In 1921, William was a widower, with his wife having passed away two years before leaving behind 5 children.  The youngest child was just two years old at the time of his fathers death.  The children were taken in and raised by William’s brother Joseph.

Sharrock was awarded a posthumous Valour Badge for his actions on the day of his death.  He lay in an unmarked grave in Warrnambool cemetery until 1998 when a headstone was erected and unveiled by former Chief Commissioner Neil Comrie.

In 2017,  Sharrock was one of the policemen recognised in Warrnambool for losing their lives while on duty with a new memorial behind the Old Courthouse.