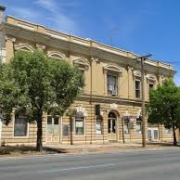 Photo published in Sydney newspapers at the behest of police in 1933 to show that detectives didn’t need to look like typical burly coppers.

Charles Leslie Stewart, 29 years, formerly a constable of police, stationed at the City Morgue, came before Mr. Justice MacIndoe for sentence on the 13th of July 1929. Stewart had been found guilty of stealing money and property from the clothes of bodies taken to the morgue. Mr. Justice MacIndoe sent him to prison for nine months.

In Bailie-street, Hotham, for the last three or four years, there has been residing a fisherman, named Patrick Smith, a married man, with one child— aged fourteen years of age. Both husband and wife, since they have resided in the locality, have been addicted to drink, and continued scenes of debauchery have been witnessed by the neighbours. On one occasion he is known to have stripped her naked on a bleak wintry night, and then placed her under the water-tap until she was almost perished with cold. At other times brutal beatings have been inflicted; but with the weakness of most women, the wife refused to take any proceedings against her husband, although she has expressed to her neighbours the conviction that he would murder her sometime or other. Of Smith’s character beyond his having been twice locked up for drunkenness, and these repented ill-usages of his wife, the police have no previous cognisance. He worked as a fisherman in the Yarra and Saltwater rivers, and has told neighbours that he could make £1 per day with the set lines and other appliances he possessed. The lad, who was the son of that unfortunate pair, was, until lately, employed at a soap factory, but the father took him away from that in order to benefit by his assistance in his fishery operations. These then are the antecedents of the persons connected with the brutal tragedy perpetrated on Saturday.

On Friday one of the usual scenes of debauchery commenced, and continued until night, when the parties seem to have gone to bed. In the morning the quarrel was resumed, and a Mrs Jane Sloane, a widow residing next door, states that it continued ‘on and off’ all day. She saw Mary Smith about 5 o’clock in the evening getting water at the tap, and when she went in Mrs. Sloane heard a heavy fall and some blows struck. Mrs. Smith did not utter a word, and Mrs. Sloane then heard Smith say, ‘ Get up you , or I will murder you. He must then have become sensible of what he had done, for Mrs. Sloane heard a, noise as if he were shaking his wife, and then he cried, ‘Mary, Mary, do get up.’ There was no one in the house at the time, and Mrs. Sloane had previously heard Smith go in by the front door, and lock it after him. Poor Mrs. Smith was never seen alive again after these blows were struck, but on account of the previous continual quarrelling, the neighbours took very little notice of what was going on.

On Saturday night, Smith went to the Hotham police-station, and informed Sergeant McCreig that his wife was dead and bleeding, but he did not know how it occurred. He was then to all appearance perfectly sober, and must have occupied the time between 6 o’clock and 10 o’clock in recovering his senses. The officer went with him to the house, and there found the unfortunate Mary Smith dead and nearly cold, weltering on the floor in her own blood, and with a horrible gash right across the forehead. The face, arms, and all the upper part of the body were tearfully bruised and mangled. The miserable murderer appears to have tried to remedy the evil he had done, for the body was lying on its side with a, pillow under the head, the right hand across the chest, and the legs drawn up. On the wound across the forehead was a quantity of bread, apparently put there with a view of stopping the bleeding. The room presented a fearful appearance. Of furniture there was but very little, and that of the most miserable description. The floor and the walls were covered with blood, and the body of the poor woman seemed to have been dragged from where she fell alongside the wall into the middle of the room. In one corner was a saucepan with the handle broken off and this handle was found elsewhere in the room, covered with gore, hair, and skin. It was most probably the instrument used in the commission of the fearful deed. About the room were also about a dozen pieces of wood, which had at one time apparently been but two pieces, but had been broken up by the man striking the deceased with them. Like the iron saucepan handle, they were covered with blood, hair and skin.  Altogether a more awful picture could hardly be imagined; and it was evident that before the last fatal wound was inflicted, the murdered woman was beaten about in a horrible manner. Sergeant McCreig having examined the room at once arrested the husband Smith for the murder of his wife; and on examination found that his trousers and other garments were besmeared with blood. The wretched murderer having recovered his senses seemed stunned by his crime, but persistently states he remembers nothing about it.

Nightclub singer Ms Haroula Kipouridou was found in the half-opened lift of her Richmond Housing Commission block on July 3, 1981. She had been raped and her face was so badly bashed she choked on blood. Prime suspect Barry Harding was killed in a car crash after serving time for the rape and murder of a child in the same flats as Ms Kipouridou. A work boot footprint was left at the scene. Harding wore similar boots. Police say they are “reasonably confident” he was the killer.

On This Day – June 13, 1936
SON CHARGED WITH MURDER.
Alexander Memery, aged 46, was shot dead in the kitchen of his farmhouse at Bookaar, near Camperdown, Victoria, on Saturday morning.
It was stated that James Alexander Memery, aged 19, son of the dead man, returned from rabbiting during a family quarrel, and that a pea-rifle he was carrying was discharged accidentally.  Mrs Memery summoned the Camperdown police, who took James Memery to the Camperdown police station, and, after questioning him, permitted him
to return to his home.
On Saturday night the police again visited the farm, and later James Memery was charged with murder.
13/06/2018/by Limelight
https://twistedhistory.net.au/wp-content/uploads/2016/06/De103447.jpg 857 1280 Limelight https://twistedhistory.net.au/wp-content/uploads/2018/10/Twisted-Logo-Tranparent-no-shadow.png Limelight2018-06-13 18:00:272018-06-08 00:13:58Shot Dead in Kitchen

ON THIS DAY ……. 3rd June 2007
Shannon McCormack, 22, was punched outside the QBH nightclub around 4am on May 27, 2007, as he attempted to break up a fight. His head hit the ground when he fell and he died in the Alfred Hospital a week later. An inquest was held into the death of Shannon McCormack in October 2011. Police released CCTV footage of a possible suspect in February 2012. Police want to speak to a man described as aged in his early 20s, thin and 165cm to 175cm tall. He was wearing jeans and a T-shirt.

Ellen Mcpherson, aged 50 years, of ,Evandale road, Malvern, was charged at the Malvern Court on Monday with having on April 13 and on April 21 placed grease and garbage in a public place. Senior constable Langslow prosecuted. There was no appearance of McPherson. With Mr C.J. Rogers, PM , on the bench, were Messrs W.T. Hattam,  T. Patterson,  A.R. Bailey and Dr. Player, JPs.

John Robert Chamberlain sergeant of police, in charge of the police of the superintendent of the south-eastern police district, said -I live in Evandale road, Malvern. I left my home at 7 o’clock on the evening of April 15, and the foot path in front of the house was then clean.  When I returned about 10 minutes to 8 o’clock I saw grease spots on the footpath extending the whole length of the front of my house.  The grease was of a green in colour, and had evidently been boiled.  On April 21 I saw on the footpath household garbage including bread, tea leaves, potato peeling, mutton bones, and what appeared to be oil, in a zigzag course on the footpath in front of the house. There was a very disagreeable odour from the grease. I reported the matter to the Malvern police.

Plain clothes Constable Leopold Barnes said -On April 23 I questioned Mrs McPherson, who said that she did not know anything about the matter. Later she admltted having placed the oil and grease on the footpath.  When I asked her why she did it she said I suppose it was for spite. I am a sick woman.

In answer to Mr Rogers, Constable Barnes said – It appears that two years ago the woman had an accident and reported the matter to Sergeant Chamberlain who not take up the case.  He is not stationed at Malvern

McPherson was fined £2 in default imprisonment for 14 days on each charge. 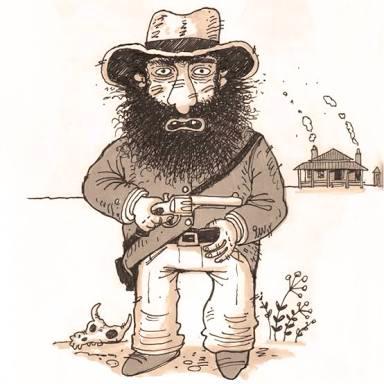 On this day in 1865, bushranger Dan Morgan arrived at Peechelba Station near Wangaratta and held up a homestead. He demanded good and entertainment, and settled down for the night, holding the occupants of the homestead hostage. On the pretext of seeing a crying baby, one of the station staff raised the alarm. Swift messenger rode to Wangeratta to get the Police.

The notorious bushranger Dan Morgan had heard that the Victorian Police had challenged him to try his luck south of the NSW boarder, which he took up the offer. On this day in 1865, Morgan visited Evan Evans to settle an old score in the King River. Hearing the police were on his trail, Morgan headed to the Warby Rangers near Wangaratta.

At an inquiry regarding the death of Albert Greaves (28) in the Melbourne Hospital on March 31 as the result of injuries to his head, the Coroner committed James Gibson for trial on a charge of manslaughter. It is alleged that in the course of an altercation in Swanston-street Gibson struck Greaves. Police constables gave evidence to the effect that Gibson resisted violently when he was arrested.