SUPREME COURT-CRIMINAL SIDE. SATURDAY. MAY 15. (Before the Resident Judge and a Civil Jury.) 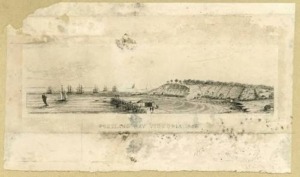 Thomas Leahy, cooper, at Portland Town, was then put to the bar, charged with the wilful murder of his wife Sarah Leahy, by having on the 16th of November last wounded her with a bayonet, thereby causing almost instant death.

John Horne, a native of China, sworn after the manner of his own nation, by breaking a plate, stated that he lives at Portland Bay—knows Thomas Leahy the prisoner, and knew his wife—Sarah Leahy is dead now, she was alive eight moons ago—saw no dispute between prisoner and his wife at that time—has seen them “making quarrels”—remembers working on the day of the murder outside the house—heard a noise and ran in—saw prisoner with a bayonet —would know it again—the one produced was the same, or exactly like it —prisoner had it in his hand—saw him stab his wife (describing the manner of the thrust)—she ran out of the back door with her hand up to her breast, and fell outside the house.

Lovel Byus, sworn: lives at Portland Bay, is a surgeon—has seen the prisoner at Portland Bay between six and seven months ago—can’t say if he was married —remembers on the 16th November last being called in to see deceased— in passing Horne’s house heard a scream —did not go in, but was overtaken by a man of the name of Brown—from his information went to the Chinaman’s hut, and there saw a woman lying on the road, and the prisoner standing near her—he said that he would go and deliver himself up, which he did—saw a wound on the deceased’s body on the left side, and examined it—remained with the woman a quarter of an hour— after examining the wound found the woman’s pulse scarcely perceptible— spoke to her, but she was senseless—saw blood upon the bayonet—am certain it was blood—it was a weapon similar to the one produced, and the wound was such as would be produced by such a weapon—the weapon was given to Mr. Blair—had a post mortem examination on the body—found an external triangular wound on the left breast of the deceased, penetrating between the third and fourth ribs to the left ventricle of the heart—it was such a wound as would produce death—I believe that it caused death.

His Honor summed up as briefly as possible; the Jury retired, and after a few minutes returned a verdict of Guilty. The prisoner was then sentenced to be executed,—time and place left to His Excellency the Governor.