In WWII, the first real attack of the Japanese on an Australian base occurred with the bombing of Darwin on 19 February 1942. That attack was the first of about 90 attacks that occurred at various places in and around Australia during the war. Shortly after this initial attack, the northwest coastal towns of Broome and Wyndham also came under fire, followed by Derby a few weeks later. It is less well known that the town of Mossman, near Cairns, was also bombed. On the night of 31 July 1942, Sub Lieutenant Mizukura dropped eight bombs, thinking that the lights he saw were Cairns. In fact it was Mossman, and while the other seven bombs have never been recovered, one fell on a sugar cane farm near Saltwater, Mossman. It caused a crater that measured 7 metres wide and a metre deep, and sent flying shrapnel through the window of the nearby farmhouse. Farmer Felice Zullo’s two and a half year old daughter was wounded in the head from shrapnel which entered the house, although she was in her cot at the time.

The child grew up to become Mrs Carmel Emmi, and on 31 July 1991, Mrs Emmi unveiled a plaque on a memorial stone commemorating the attack and her survival. The memorial stone is situated on Bamboo Creek Road, after the turnoff to Whyanbeel.

From the mid 1800s, writings about strange ape-like creatures in Australia abounded. One of these was a diary entry from the Connondale region of southeast Queendland, written on the 25th of July 1851, which stated:
“They are short, stout and of very muscular appearance. They are covered in thick black hair…Their hair and beards are long…They are completely naked…the stench of their body is unbearable…great hunters of the forests and jungles…They come and go without being seen. They can hide in the undergrowth in such a manner that one can be touched or struck without their person being visible. I am to wonder if these are the same people…who take people away when they dare enter the forests and jungles…the women made grunt-like expression during contact…the child hung to its mother on the breast in the manner of an ape. These were the Woningityan/Won-ingee-tyan – the shadow men creatures of the jungles and forests…”

A blind man in a Brisbane Asylum never missed an inmates funeral in the 30 years he was there between 1890 and 1920. He took his stand 200 yards from the morgue and when the hearse passed he, fell in behind for the mile walk to the cemetery. After listening to the service, he made his way back to his room. He attended more than 3500 funerals.

William Cunningham of Paddington, Brisbane was found with his tongue frozen against a pipe at the Mountain Milk Company’s freezing works at Dayboro, Queensland, on the 18th of July 1936. The 20 year old was released from the pipe after water was poured on his tongue.

On this day in 2001 an unexpected speed bump on the road to the Cairns Airport in Queensland gave a taxi driver and his passenger a fright when it turned out to be a two meter crocodile laying in the sun.

The blacktrackers brought from Queensland to find Ned Kelly and his Gang left Benalla, North East Victoria on this day in 1880 after being withdrawn from the hunt. The Queensland government considered they were not being given a fair chance. The operation had not been encouraged by officers in the Victorian Police (like Commissioner Standish), who thought it would be rather bad form if the outlaw could be captured by savages and not by European policeman.

“Harriet” was a Giant Galapagos tortoise, at least 176 years old, which resided at Steve Irwin’s Australia Zoo near Beerwah, Queensland, Australia. Believed for one hundred years to have been a male, she was the world’s oldest living chelonian in captivity. A chelonian is a reptile with a shell or bony plates. The giant tortoise was taken from the Galapagos Islands by naturalist Charles Darwin in 1835 as a personal pet during his five-year voyage on the HMS Beagle. On that voyage was a young naval officer, John Clements Wickham. After studying Harriet whilst formulating his theory of evolution, Darwin handed the tortoise on to Wickham when the latter sailed for Brisbane to take up a post as police magistrate. Over the years, the tortoise was carefully tended, and in 1958, was moved to naturalist David Fleay’s wildlife park on the Gold Coast. She was moved to Australia Zoo on the Sunshine Coast in 1987 where she enjoyed celebrity status until her death on 23 June 2006.

On this day in 1906, two cows owned by Mr F. Dolan of Logan River district in Queensland were found with their horns entangled as a result of fighting. They had apparently been that way for some time. They were freed by a hand saw cutting the horns. Neither animal was injured, although they were both very weak.

While fishing on the Balonne River in Queensland on this day in 1925, a lucky fisherman managed to catch two fish with the one hook. At first a 3kg cod took the bait, the fish was in turn swallowed by an 18kg cod. Both fish were successfully landed. 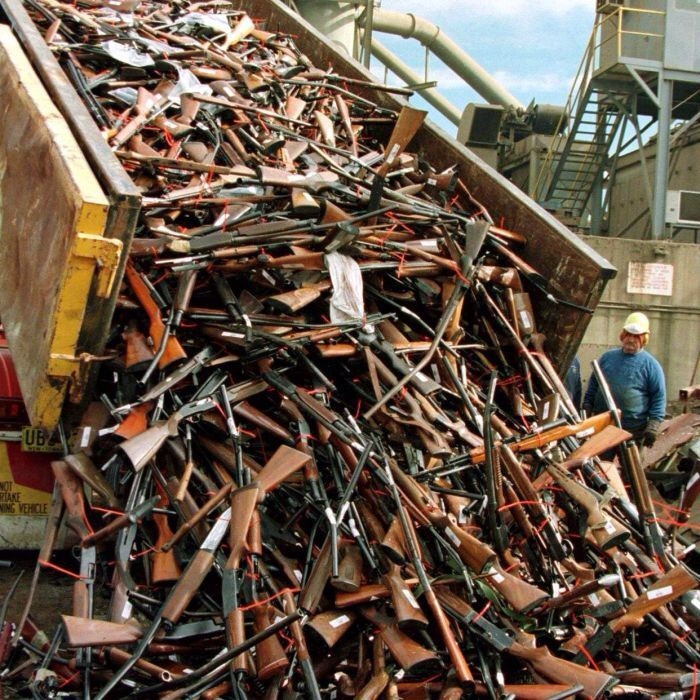 Photo from 1997, piles of guns in Australia are moved after a landmark law that resulted from a mass shooting. Now, Australians are saying the US could learn their lesson.

There’s little doubt that the 2010/2011 Queensland floods were Australia’s most devastating in terms of damage to infrastructure and cost, but the worst loss of life happened in June 1852 when massive flooding on the Murrumbidgee River swept away most of the town of Gundagai, leaving just three houses standing. Eighty-nine people were killed, more than third of the population. The town was later rebuilt on higher ground.
2. Dec 2010 – Jan 2011 – Brisbane and SE QLD

With more than 200,000 people affected state-wide, the economic damage from this flood was estimated at $2.38 billion. Beginning with rains in September and then culminating with Category 1 Cyclone Tasha crossing the Far North Queensland coast on 24 December 2011, this was probably the most notorious flood in Australian history. In Brisbane, the river peaked at 4.46m on 13 January, flooding more than 28,000 homes and leaving 100,000 without power. Cyclone Yasi, which hit 3 Feburary, caused further damage to already sodden towns.
3. Dec 27, 1916 – Clermont and Peak Downs, QLD

A cyclone swept the coast along the Whitsunday Passage, bringing heavy rainfall to Clermont, Sapphire and Peak Downs. This usually flood-savvy town forgot to counter for the runoff from nearby catchments and creeks and the debris it carried with it at crushing speeds. The torrent smashed through houses and caused widespread damage. The lower part of Clermont was submerged, so the town was rebuilt on higher ground.
4. Nov 29, 1934 – Melbourne, VIC

In late November 140mm of rain fell in Melbourne over a 48-hour period. To the east of Melbourne, in South Gippsland, 350mm fell over the same two-day period. The downpour resulted in landslides, evacuations and many submerged roads. Eighteen people drowned, with a further 18 killed by collapsing buildings and other dangers. More than 400 buildings were damaged in Melbourne and 6000 people were left homeless.
5. Feb 15, 1893 – Ipswich, QLD

Often referred to as the Black February Flood, the extreme weather conditions and heavy rain were brought about by tropical Cyclone Bundinyong. The Crohamhurst weather station recorded 914mm of rain in a 24-hour period and another gauge recorded almost 889mm of rainfall in Brisbane’s water catchments. Both the Victoria Bridge and the Indooroopilly railway bridge collapsed, with 35 people killed and 300 injured.
6. Feb 1927 – Brisbane, Cairns, Townsville, QLD

A tropical cyclone hit north of Cairns, causing major rainfall through Queensland, reaching as far as Toowoomba. The torrential rain, which fell from 9-17 February, led to the deaths of 47 people, damaged roads, railways, bridges and buildings – and completely destroyed 16 houses. There was also widespread loss of livestock. The estimated costs reported at the time were in the region of £300,000.
7. Apr 1929 – Northern Tasmania

The area of Northern Tasmania is prone to heavy rainfall over short periods and up to 500mm of rain fell over three days. The floodwater carved a path across the region, destroying everything in its path, including vehicles, buildings and railroad tracks. It inflicted huge stock losses, the evacuation of 3500 people, while damaging 35 bridges and 1000 homes.

The majority of deaths were around Singleton and Maitland, but most other river systems in the state were also in flood. These floods in the Hunter Valley have become symbolic in the Australian psyche of the dramatic nature of flood damage and rescue. About 15,000 people were evacuated from around these two towns, with more than 40,000 people being evacuated from a total of 40 towns. Five of the lives lost were due to electrocution during rescue operations.
9. Jan – Apr 1974 – Brisbane, QLD

After a particularly wet year in 1973, Brisbane was inundated with water when tropical cyclone Wanda hit the north of the city on 25 January 1974. By 29 January the Brisbane area had recorded 900mm of rain, with 314mm of rain falling in a 24-hour period. In the coming months the torrential rain swept down the east coast, causing floods in parts of NSW and Tasmania. The floods killed 14 people and injured 300 more, as well as destroying 56 homes and damaging 6000 others. In all, an estimated $68 million worth of damages occurred.
10. Aug 1986 – Hawkesbury and Georges River Flood, NSW

With the rainfall reaching 327.6mm in 24 hours, this day has been dubbed Sydney’s wettest day ever. The torrential rain created chaos, with flooded roads prompting many motorists to abandon their cars. Bus services were severely disrupted in the city and trains were halted due to flooded tunnels.