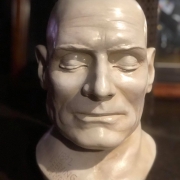 Frederick Bayley Deeming was one of 14 children born to Thomas and Ann Deeming in Leicestershire, England.

Frederick would first get into trouble with the law aged just 15 years old  for throwing rocks at a train.  At 16 he ranaway to see and began his life of crime with stealing and obtaining money by deception – something which would be a common thread for the rest of his life.

The beginning of the end for Deeming began with the discovery of Emily Lydia Mather’s decomposing body buried beneath the hearth of the second bedroom at 57 Andrew Street, Windsor on March 3, 1892. 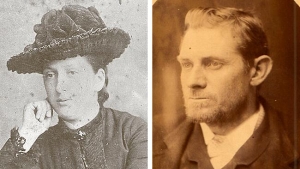 Emily had married Deeming, who was know as Albert Williams in Rainhill, Lancashire in 1891 before the young couple set out for Australia.  They arrived in Melbourne in November 1891 and stayed for a short time in the city of Melbourne before heading to the rented property in Windsor.  Emily was not to know that this house would become her coffin!

On Christmas Eve, Deeming murdered Emily and in a well prepared plan buried her remains within the house before heading back to Melbourne.  He had paid up the rent for a couple of months so it wasnt until a new prospective tennant inspected the property that Emily’s remains were discovered.

By this time, Deeming had headed to Sydney and enticed Kate Rounsfell to marry him and move to WA with him.  Luckily for her Deeming left first and Kate only made it as far as Melbourne before news broke of her fiancee’s evil deeds.

But Emily was not the first murder Deeming had committed.  During the investigation into the death of Emily, it came to light that Deeming had been married before and had 4 children.  Marie and the children were found murdered and cemented under the kitchen floor at the property Deeming had rented in Rainhill.

Deeming was finally caught out by clever detective work and his boasting of his accomplishments.

Deeming was sentenced to death and was executed on May 29, 1892 at the Old Melbourne Gaol.

Before his death, a telegram was sent from London, requesting that Deeming be interviewed over the Whitechapel murders of 1888.  It would join numerous requests from police forces around the world asking if he could have been responsible for as many as 18 murders.