In connection with the escape of two prisoners from Darlinghurst Gaol, Sydney the Deputy-governor has been suspended. The Public Service Board investigated the charge of neglect of duty preferred against that official, and found that it could not be sustained.

Rivalry between Australia’s two largest cities, Sydney and Melbourne, has been rife since the days of the goldrushes in the mid-1800s. Sydney, as the main city in New South Wales, was regarded as the logical choice for Australia’s capital city. Melbourne, however, was close to the wealth of Australia’s richest goldfields, and lacked the dubious convict past of Sydney. As the idea of Federation of the states gained momentum, it was decided that a new federal capital should be chosen. Thus, on 3 February 1899, at the Premier’s Conference held in Melbourne, it was decided that the new capital city would be in New South Wales but situated at least 100 miles from Sydney. Over the next nine years, numerous locations were considered, until the Yass Plains location was finally selected in 1908. Section 125 of the Constitution of Australia provided that: “The seat of Government of the Commonwealth shall be determined by the Parliament, and shall be within territory which shall have been granted to or acquired by the Commonwealth, and shall be vested in and belong to the Commonwealth, and shall be in the State of New South Wales, and be distant not less than one hundred miles from Sydney. Such territory shall contain an area of not less than one hundred square miles, and such portion thereof as shall consist of Crown lands shall be granted to the Commonwealth without any payment therefore. The Parliament shall sit at Melbourne until it meets at the seat of Government.”

The tradition of noticing the 26th of January, began early in the nineteenth century with Sydney almanacs referring to First Landing Day or Foundation Day. That was the day in 1788 Captain Arthur Phillip, commander of the First Fleet of eleven convict ships from Great Britain and the first governor of New South Wales, arrived at Sydney Cove. The raising of the Union Jack there symbolised British occupation over the Aboriginal inhabitants of the eastern half of the continent claimed by Captain James Cook on the 22nd of August in 1770.

The body of a Scotsman, Donald McDonald was exhumed from a grave yard in Sydney on this day in 1953. The coffin did not contain the wooden legs in which his relatives believed he had hidden his fortune, inside a secret compartment. The 53 year old seaman was penniless when he died in April 1951, but his relatives on the Isle of Mull thought otherwise and requested the exhumation.

On 21 January 1991 severe thunderstorms moved across the northern suburbs of Sydney during the afternoon. Strong winds and large hail stones caused extensive damage. Hail stones up to 7 centimetres (2.8 in) in diameter and flash flooding was reported in several locations. Some areas received more than 35 millimetres (1.4 in) of rain in 6 minutes and more than 60 millimetres (2.4 in) in half an hour. Areas of most severe damage stretched from the Warrawee–Turramurra area to Duffys Forest, with significant damage occurring to property in the Ku-ring-gai, Hornsby and Warringah council areas. More than 7000 houses were damaged. The total estimated insurance payout for the storm was estimated at A$215 million. 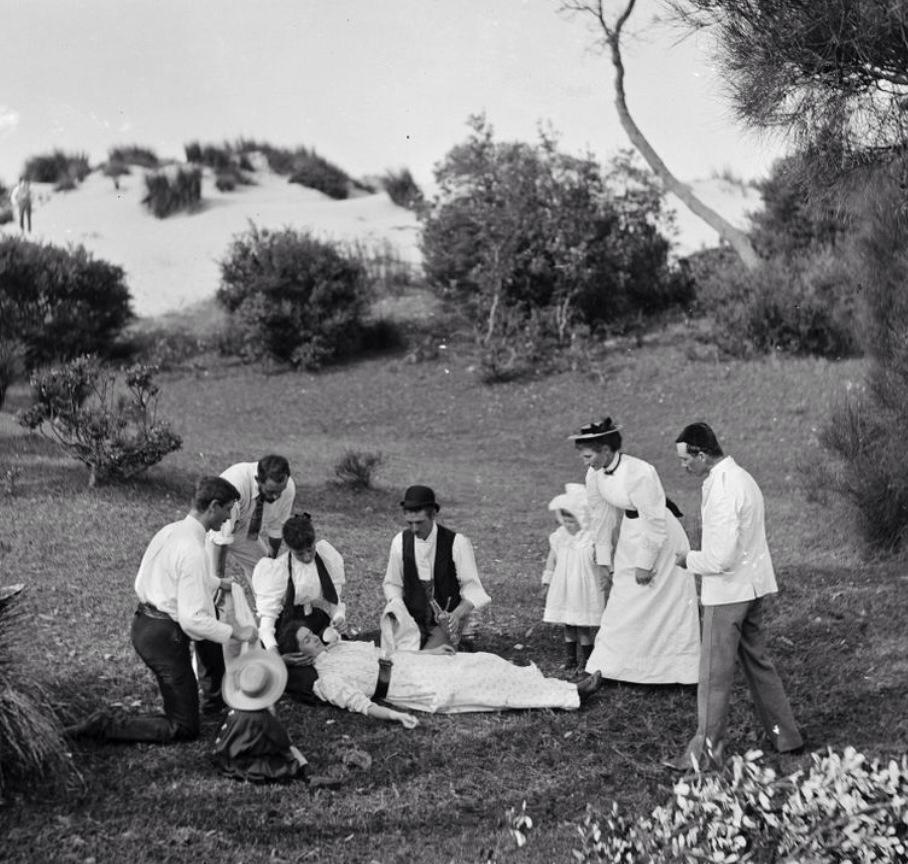 A fainting fit after a hot day at the beach front? Possibly, or maybe a blow to the head. Either way, hardly surprising as this elegant lady was engaged in a bare-knuckle boxing match with another woman. No hard feelings though; her opponent is seen here offering her a spot of water from a tea cup in an apparent attempt at revival. Sparring in 1895 in Sydney’s Freshwater, the pair may have been among the first women to box in Australia. Women’s prize fighting boxing began in the 1720s in England, but what scant records exist of Australian women’s boxing suggest that the first classes didn’t start to be offered until 1892. The sport remained controversial, banned in New South Wales as recently as 1986 to 2008. Internationally, it was only in 2012 that women’s boxing was allowed at the Olympics. 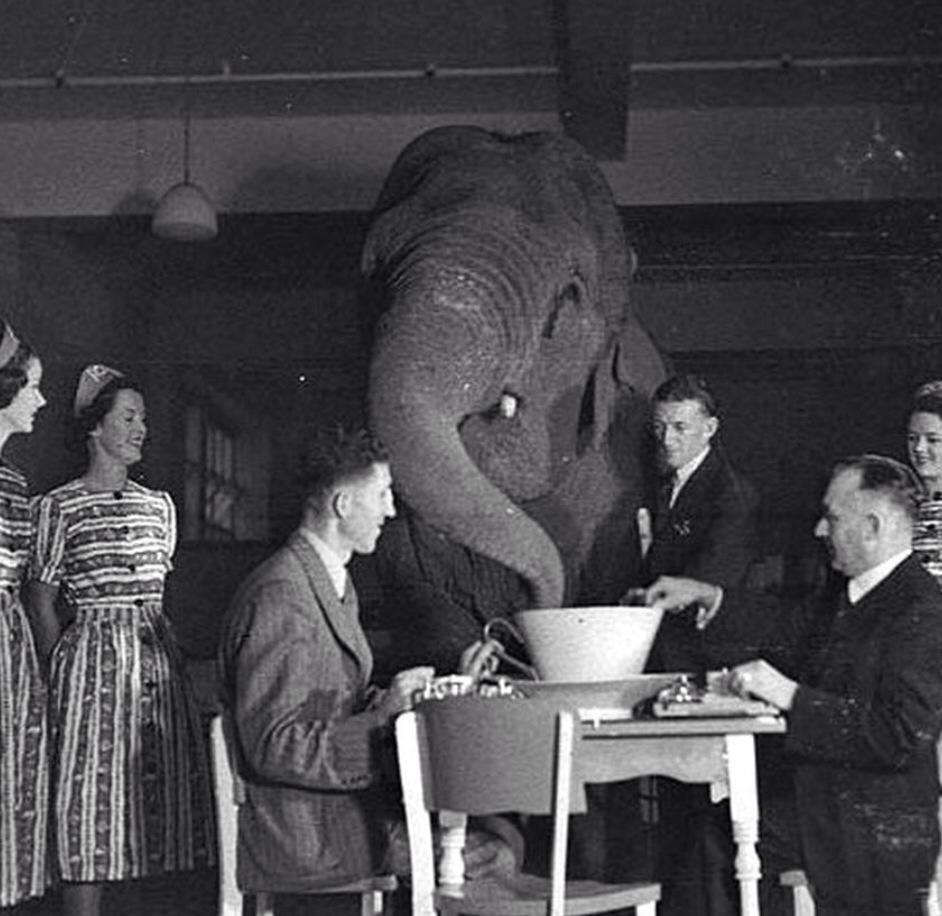 On loan from Wirth’s Circus, Australia’s largest and most prestigious circus company, the Robur elephant toured Sydney tea rooms in March 1939. As ridiculous as it might seem nowadays, the elephant made a special guest appearance at 695 George Street, a stone’s throw from Central Station and one of Sydney’s busiest precincts. The elephant also dropped by a Bussell Brothers grocer on Anzac Parade in Maroubra in the city’s east. And when an elephant came to visit, there was clearly no shortage of novelty-sized tea cups and charmed onlookers.

In November 1944, a group of boys on bikes tore through Sydney in pursuit of a ghost. Sadly it wasn’t the real-life inspiration for Ghostbusters, but a publicity stunt for the new film Ghost Catchers, which had opened at the Capitol Theatre. The scariest thing about the US musical-comedy, starring vaudeville duo Olsen and Johnson as “sleuths who clean out some pugilistic ghosts from the home of wide-eyed neighbours”, was its Aussie reviews. Women’s Weekly deemed its “bodies in closets, screams and gunfire” as “too much of a good thing”, the Sydney Morning Herald complained the pair’s schtick “is wearing thin”, while the Advertiser decried it as “strictly juvenile fare … entirely devoid of rhyme or reason”.

Edna Pirter narrowly escaped death on this day in 1950, when her runaway car crashed through a stone wall in the Sydney suburb of Balmoral and landed in a tree 3m below, just before the edge of a 30m drop. Mrs Poter had been driving down a steep hill when her brakes failed. Her only injury was a cut to her lip.