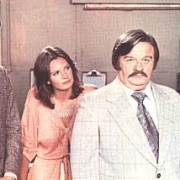 Bluey was an Australia police drama series made by Crawford Production in Melbourne for the Seven Network. Which ran from the 2nd of August 1976 to the 25th of April 1977.

Hills character was different to other detectives seen in Crawford’s previous shows. Being obese, heavily drinking, smoking, visited prostitutes, Hills character took on a life of its own.

Bluey was set at Melbourne’s Russell Street Police Headquarters, and many scenes were shot around South Melbourne.

“Bluey” Hills heading his own squad (“Department B”), due to his inability to work within the existing police squads.

Department B was given cases which the other departments could not solve by conventional means.  Hills applying his unconventional methods to bring about their resolution.

Unlike other Australian TV series at the time the entirely show shot on colour film.

Bluey found a new audience two decades later when the dubbed clips from the show formed the basis for the popular The Late Show comedy sketch “Bargearse”.

In addition to two guest appearances as himself, Grills also reprised his role as Bluey on The Late Show in order to protest the airing of the last Bargearse sketch.

Another enduring element from the show, the theme music, is now best associated with coverage of cricket from Nine Network’s Wide World of Sports.